Özgürlük Araştırmaları Derneği
Ana Sayfa Blogs The Report on the Separation of Powers, Checks and Balances, and Legislative... 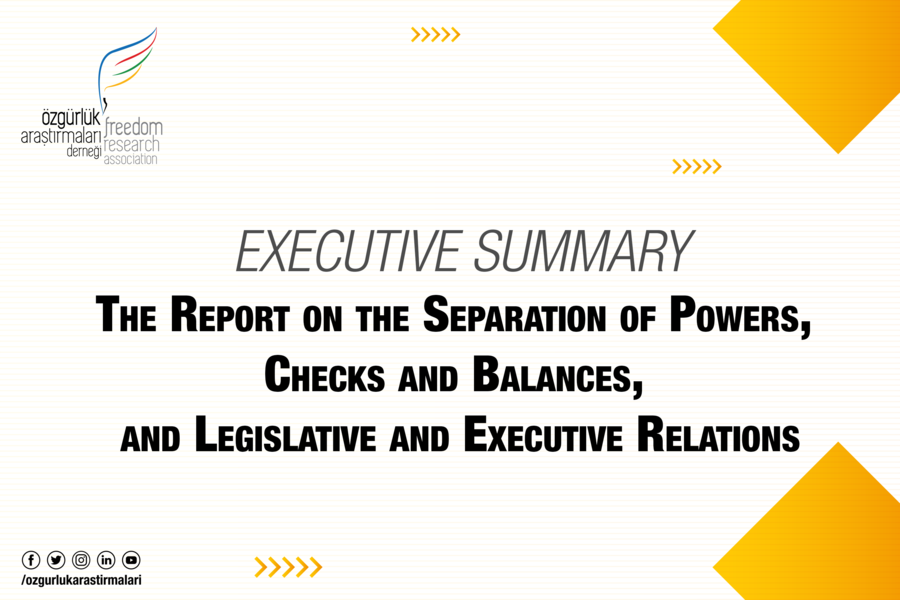 The Project on Structural Reforms in Turkey has been launched by Freedom Research Association with support of the National Endowment for Democracy and Friedrich Naumann Foundation Turkey Office to identify and concretize existing problems in the mechanisms of the legislation, Judiciary, Public Procurement Regime, Public Personnel Regime and Media Independence, which are the main institutions/structures. Within the context of the project, alongside discussing existing issues in the relevant institutions, it has been focused on the structural reforms and relevant suggestions. The report, named “Separation of Powers, Checks, and Balances, and Legislative and Executive Relations” and prepared by Prof. Ömer Faruk Gençkaya, addressed the relations between the legislative and executive relations and current checks and balances mechanism in Turkey in the context of the separation of powers principle.

The peculiar "presidential government system" adopted by the referendum of April 16, 2017, presents a model that gives extensive legislative powers to the executive branch that has in essence taken the parliament in tow, and virtually neutralizing legislative and judiciary and other means of checks and balances. Problems in the parliamentary system regarding the placement and functions of the separation of powers principle and mechanisms of checks and balances have rapidly increased, accelerating the loss of efficacy in the parliament.

To measure the effectiveness of parliament, organizational structures (also rules, norms, and resources) or legislators (MPs) have crucial roles. To measure the performance of parliament, to be defined as strong or weak, its policy-making power or capacity rather than the number of policy outputs can be assessed. In the limited numbers of studies on the effectiveness of the Grant National Assembly of Turkey, the legislative-executive relations, the role of the commissions in the legislative process, the working rules (internal regulations), the law-making and supervision capacity, the political party system, the attitude and behavior patterns of the deputies have been emphasized as crucial factors.

The new political system that was modified with the 2017 constitutional amendment, grants extraordinary regulatory powers to the president, decreases the parliament's role in the legislative process and in overseeing the government. The last amendment in internal regulation in 2018 aimed to accelerate the legislative process by removing some of the blocking tools used by the opposition parties in the parliamentary process, rather than changing the requirements of the government system change. It has been observed that the "hyper-presidency" powers in the legislative process further weaken the basic functions of the Grand National Assembly of Turkey and make it dependent on the executive.

In the new political system, apart from the constitutional-regularity deficiencies, the forms of authority and functions have become more complex than before and created a negative impact on the relations between the legislative-executive and judicial powers. Furthermore, executive power has the authority to select the members of the supreme council of judges and public prosecutors, with direct or indirect ways, through the majority of the Grand National Assembly of Turkey, and also determine the members of the constitutional court, which be considered to work as checks and balances mechanism, despite its limited space and power. This way, it determines the judiciary and higher judiciary.

It is inevitable that the accelerated legislative or constrained control tools render the legislative body dysfunctional in legislative and supervisory matters of the TBMM internal regulation to be effective and efficient. For this purpose, it is necessary to decide whether the TBMM will be commission-weighted or general assembly-weighted in legislative and auditing matters.  On the other hand, it is impossible for the executive power, which is separately elected from the legislative body, to have autonomous commissions in the Turkish parliament as a result of a President who maintains his party ties and leadership position. It is necessary to reassess the positive and negative aspects of conducting the parliamentary and presidential elections simultaneously. Since the parliament is under the partial or complete control of the president, who is the head of executive power, but at the same time being a chairman of the political party, it would not be possible to realize the legislative body's control and balancing functions.

Within the framework of legislative-executive relations in Turkey, there are many issues related to legislative activities to be discussed. First of all, not only institutional aspects (like changing internal regulations, reorganization of commissions, digitalization, expert recruitment, electoral system, etc.), but also principal and value-based dimensions (such as openness, transparency, participation, accessibility, accountability, and effectiveness), as well as constitutional principles (separation of powers, checks and balance mechanisms, election, candidacy, representation), need to be taken into consideration.

A number of suggestions can be made to increase the efficiency of the Grand National Assembly of Turkey and provide effective checks and balances mechanisms in the presidential government system. Adherence to the constitution and the rule of law will facilitate the implementation of these suggestions. A “reform” proposal, which is not constituted based on the relevant principles would not create efficient outcomes. Suggestions should be developed with a holistic and functional perspective, particularly in the internal regulations. The structure that the Turkish Grand National Assembly needs is to analyze the procedures and processes with an impact analysis approach, which is one of the methodological principles. Thus, suggestions can be followed: