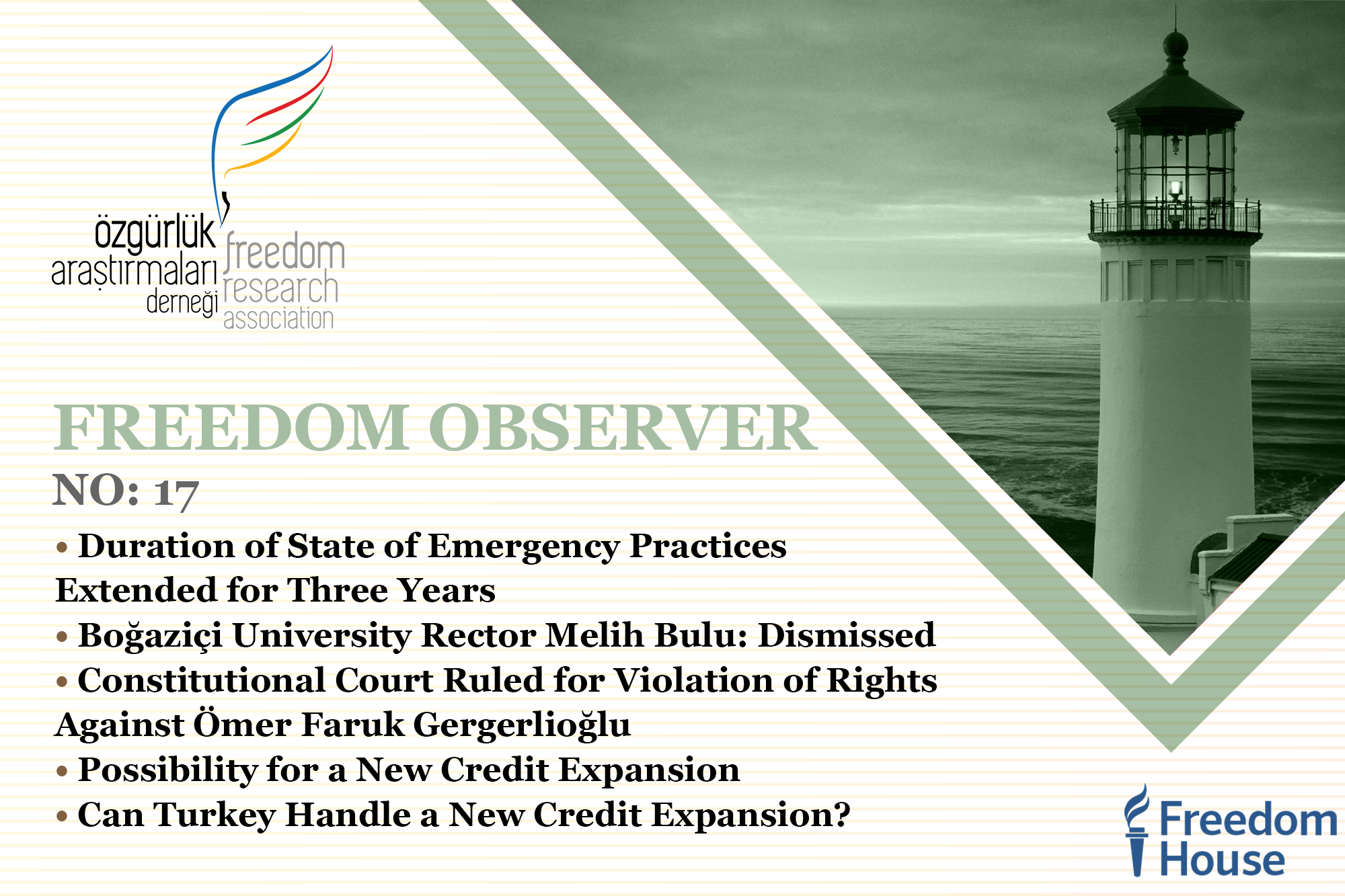 It has, unfortunately, been commonplace for quite some time that Turkey’s negative record on the ideals of law and justice, human rights and democracy has not improved at all. The content of the 17th issue of the Bulletin shows that the situation has not changed much today, and that Turkey continues its determination to violate universal rights as evident in the recent yet a very serious new example.

This is an example of the fact that an attempt to amend the law was initiated by the deputies of the ruling coalition, which will allow some of the unreasonable and disproportionate restrictions on rights brought under the state of emergency, to be continued for a while. Among these are the extension of the detention period of suspects who are considered to be related to terrorism, the arbitrary dismissal of public officials and the continuation of the practice of appointing trustees for another 3 years. It is revealed that this period will be reduced to one year given the reactions from the opposition and the public.

Meanwhile, at the beginning of this year, the well-known rector, whose appointment as a trustee to Boğaziçi University by the President caused a reaction, was finally dismissed. It is doubtful, however, that this new move by the government means that the will of the University community, with its faculty and students who have been adamantly resisting the appointment of the trustee-rector for months, is being respected. As a matter of fact, the first job of the Vice-Chancellor in office, who was appointed as a proxy for the dismissed rector, made it clear that he was determined to continue the controversial practices of his predecessor by terminating the assignment of a protesting faculty member and initiating an investigation against him.

The only positive event of the past two weeks was that a human rights activist Ömer Faruk Gergerlioğlu, who was unlawfully dismissed from his parliamentary seat and then sent to prison, was finally released upon the Constitutional Court’s determination of the injustice done to him and returned to his seat as a member of parliament.

However, one would expect that coming weeks will likely to be filled with events that will change the positive atmosphere created by Gergerlioğlu’s release. As we mentioned in our last issue, the dispatch of soldiers to Afghanistan as a combat force is among these. But another worrying event that will take place more soon is President Erdogan’s visit to the KKTC on July 20th. Unfortunately, it is highly likely that this visit will trigger some issues that will both make the lives of Turkish Cypriots more difficult and harm Turkey’s international relations.

Hoping to meet with more optimistic news in the next Bulletin.

Duration of State of Emergency Practices Extended for Three Years

It was reported that Interior Minister Süleyman Soylu conveyed to President Erdoğan that this “regulation is important for the fight against terrorism”.[2] Opposition parties, however, stated that this regulation suffers from serious drawbacks in terms of the rule of law. IYI Party Group President in the parliament, İsmail Tatlıoğlu argued that the main purpose of this law amendment is to “ensure that Turkey enters the next election under a state of emergency”.[3] CHP Istanbul Deputy İbrahim Kaboğlu stated that the AKP did not provide a reasonable justification, and that the justification for the “fight against terrorism” did not go beyond “common political valor”. [4]

Extending the duration of the state of emergency for another three years poses serious problems in terms of the rule of law and human rights. It is known that the extension of detention periods in Turkey is applied arbitrarily in many cases. In order to prevent detention practices from turning into a means of punishment, this amendment should not enter into force.

Melih Bulu, who was appointed as the rector of Boğaziçi University by President Erdoğan about seven months ago, was surprisingly dismissed without informing him on July 15, 2021, by the Presidential Decision.[5] Since the day Melih Bulu was appointed as the rector, this decision was intensely protested by various segments of the society, especially students and faculty members, and the protests continued to take place in different forms almost every day. During the protests, police and security forces used violence against students from time to time, many students were detained during the protests, and contracts of part-time lecturers who criticized the appointment of the rector were terminated. In this regard, the dismissal of Bulu was welcomed among students and faculty members.

Indeed, some possibilities were brought forward in the public about the motives behind Bulu’s dismissal. According to some, the dismissal of Bulu is considered as a step back by the government as a result of the endless and stable protests. On the other hand, some argue that Bulu was dismissed by the President for not displaying a tough management approach, that is, he was being “soft” to professors and students, and failing to put the university in the direction desired by the government.

We will only be able to understand why Bulu was dismissed when we see who will appoint the new university Rector, i.e., university or president and by what method, i.e., election or appointment. However, it should be noted that in both cases, the resistance of Boğaziçi University students and professors had an undeniable great impact on Bulu’s dismissal.

On July 1, 2021, the General Assembly of the Constitutional Court decided on the individual application of HDP deputy Ömer Faruk Gergerlioğlu, who was sentenced to two years and six months in prison and stripped of his parliamentary status for sharing a link to an article published on T24 on his social networking site in 2016.[6] While the Constitutional Court determined that Gergerlioğlu’s right to vote, to be elected and to engage in political activities, as well as his freedom of expression, was violated, it did not examine the allegations that his right to a fair trial was violated and that the state abused its restrictive power.

The court first examined whether it was foreseeable that the applicant, who was elected as a deputy during the trial, had not been granted parliamentary immunity. In this context, it decided that the phrase “provided that the investigation was started before the election for situations defined in the article 14 of the Constitution”, which was stipulated as an exception to immunity in Article 83 of the Constitution, was not foreseeable. The Court particularly emphasized that no concrete crime was regulated in Article 14 and that the Legislature did not make any legal regulation on this issue. In addition, the Court emphasized that the rules to be followed are not clear when determining what the “situations in the article are” and that no procedural guarantee is foreseen in this process. In the event that an investigation is launched for the same crimes while being a deputy, it is envisaged that the allegations will be evaluated by both the TBMM commission and the General Assembly as well as the Constitutional Court’s supervision is stipulated in Article 85 of the Constitution. However, it has been stated that there are no guarantees if the investigation starts before the deputy is elected.  Thus, the Constitutional Court stated that the constitutional regulation regarding the situation envisaged as an exception to legislative immunity was not clear enough and that the legislature did not make the legal regulation stipulated in the constitution. The Court decided that the legislature violated the constitution by negligence. For this reason, it also decided to send a copy of the decision to the TBMM.

At the same time, the court stated that it is not possible to interpret the news about a call for peace on social media as making propaganda for the forceful and violent methods of the terrorist organization, and decided that the criminal courts’ sentencing of the applicant violated his freedom of expression. However, the Constitutional Court stated that there is no need to conduct any examination on the allegations that the applicant’s right to a fair trial has been violated. There is no explanation in the decision regarding the allegations that the applicant was punished for the violations of rights he voiced as a deputy, and therefore no need to examine whether the state abused its power to restrict rights. Despite the announcement of the AYM decision in the media and the announcement of the application result on the AYM’s website, the decision was not sent to the local court and Gergerlioğlu was detained for another five days. The reasoned decision was sent to the local court only five days later and Gergerlioğlu was released after that.[7] Now, the local court has to initiate the retrial process and decide to stop the proceedings and this decision is to be sent to the TBMM and Gergerlioğlu should return to his parliamentary status again. However, the criminal courts, including the Court of Cassation, continue to interpret the crimes related to propaganda for terrorist organization very broadly contrary to the clear case-law of the ECHR and the Constitutional Court.

Possibility for a New Credit Expansion

On July 8, 2021, by citing public authorities, Reuters reported on the government’s plans to provide capital support to public banks for a new credit expansion.[8] The government, which used an inefficient and short-term method in the form of credit expansion as a pandemic measure last year, is expected to use credit expansion this time as a step to stimulate the market before the snap elections. Last year, the government transferred 21 billion Turkish liras to the public banks that gave loans with negative real interest. The state banks whose profitability has fallen by up to 90 percent need to be supplemented with equity for a new credit expansion. Because the stronger a bank’s equity, the more loans it can give. Public banks’ equity adequacy in Turkey is quite low compared to private banks in the sector. Therefore, it is possible to transfer money to these banks for a possible credit expansion.

On the other hand, there is another reason for the need to increase the equity of public banks: uncollectible loans. Contrary to all Basel standards, Turkey extended the follow-up period for non-performing loans due to the pandemic. In other words, loans that are very likely to be bad, do not appear as toxic assets on bank balance sheets yet. With the reflection of these on the balance sheets, the lack of equity will have started to appear clearly.

All these movements to revive the market are made to provide some relief before the elections. But their effect is very temporary. Because there is no return for the credit created. The continuous expansion in Turkish lira brings with it an increase in foreign exchange. In addition, since the credit distribution mechanism is not fair, an environment emerges in which many large loans are refinanced (refinancing), but the loans used by the salaried sector are not re-evaluated in any way.