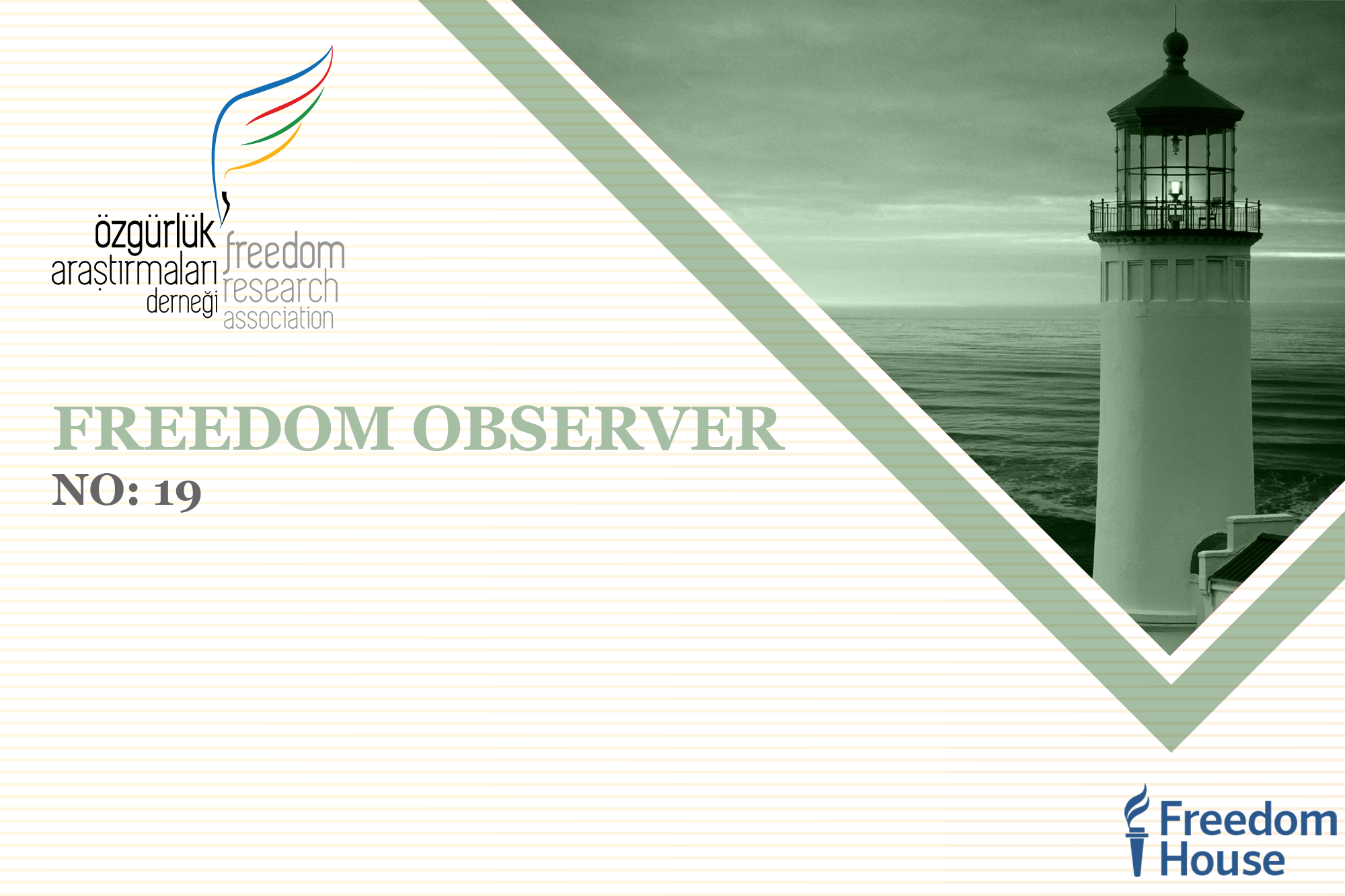 The Constitutional Court recently made an important decision regarding the criminal legislation upon an individual application of a citizen, a decision that is pleasing, yet, at the same, worrisome… The General Assembly of the Court ruled that the provision in the 6th paragraph of Article 220 of the Turkish Penal Code, which stipulates that “those who commit crimes on behalf of a terrorist organization, even though they are not a member of the organization, are punished as if they were members of an organization” is, indeed, vague, and unpredictable. The decision was made due to the application of a citizen who participated in the demonstration held in front of a political party’s building. The pleasing side of the decision is that the Court determined it to be a “pilot decision” due to the “structural” nature of the violation originating directly from the law.[1] This decision of the Court, which had been determined to be in violation of the European Convention of Human Rights by the European Court of Human Rights (ECHR) as well as in violation of the constitution of the Republic of Turkey, made way for the related article to be re-regulated by the Parliament, at least, theoretically.

However, as explained below, it is unequivocally worrying that the Constitutional Court has decided to hold similar applications regarding the same provision for one year in the meantime. This decision actually means that the Court allows the violation situation to continue for one more year for the other applicants. Although the ECHR made a similar determination about the same provision 4 years ago, it is doubtful that the Parliament, which has not made the necessary legal changes until today, will fulfill the judicial decision in due time.

Meanwhile, the issue of appointing the rector of Boğaziçi University, which has been dragging on since the beginning of the year due to the persistent protests of the university community, has apparently been resolved with the appointment of Naci İnci, who had served as Bulu’s deputy, in place of the dismissed Melih Bulu. However, the problem seems not to be resolved since Naci İnci’s appointment as rector has been rejected by the votes of members of the Boğaziçi University. In accordance with the spirit of the presidential system, where the President appoints not only the university rectors but all public offices by himself, the President, again, appoints a person to the Rectorate, who, as in the first appointment, clearly opposed by the university members this time. This is, indeed, quite worrisome. As Naci Inci’s appointment unravels that the President has no intention to take the will of the university community into consideration, and he is determined to do what he feels like.

As the Boğaziçi case reveals that the current government has no intention to build the cornerstones of a civilized society. On the contrary, the problems faced by universities are not limited to arbitrary appointments of university rectors. A more pressing issue with a fundamental value is that the concept of ‘university’ has increasingly diminished, which gives us a lot to worry about the prospects of future scientific development in our country. In fact, universities in Turkey are headed toward turning into high schools.

Of course, there are other problems, which we have pointed out in our previous issues, waiting to be solved. Case in point, there is an urgent need for legal regulation in line with human rights regarding the “foreigners” in our country, which has become a highly contested matter with the Afghan migration after the Syrians. The government seems yet to have designed a policy on this issue. A similar situation holds regarding the presence of soldiers in Afghanistan and what kind of relationship will be established with the Taliban administration. In addition, in terms of social peace and harmony, there is an equally urgent need for the government to share with the public what it thinks and plans to do on these issues.

See you in the next bulletin.

Prior to this appointment, a vote was held with the participation of 82 percent of Boğaziçi University academics. 19 candidates competed in this voting and 17 candidates received votes of confidence from their colleagues.[3] Yet, the appointment of Prof. Dr. Mehmet Naci İnci, one of the two unsupported candidates, to the rectorate was met with harsh reaction from both university students and academics.

With this appointment, the AKP government once again ignored the demands and concerns of the university components and showed that it was indifferent to the months-long protests. The AKP’s insistence on appointing those who are politically close to the party to the rectorate shows that it targets Boğaziçi University as an institution that needs to be captured. To this end, the government focuses on who will be appointed, not on the method of appointment. However, it seems that the government is not successful in such an endeavor. It by now clear that Turkey has been experiencing a rapid decline in academic freedom in recent years. One of the leading reasons for this is politically motivated appointments to universities. Rectors are tasked with the mission of serving as an academic security supervisor and working as the extension of the political power in the academy, and are involved in the academic activities of the faculty members. Moreover, in recent years, rectors play a critical role in whether academics are expelled from the university by exceeding their authorities and responsibilities in the administrative process. This situation not only makes the government regard the rectorate as an authority that should be seized, but also impoverish the academic freedom and quality.

The General Assembly of the Court ruled that the provision in the 6th paragraph of Article 220 of the Turkish Penal Code, which stipulates that “those who commit crimes on behalf of a terrorist organization, even though they are not a member of the organization, are punished as if they were members of an organization” is, indeed, vague, and unpredictable. In the General Assembly decision regarding the application of Hamit Yakup published in the Official Gazette dated 3 August, the Constitutional Court found that the applicant’s right to peaceful assembly had been violated, as he was sentenced to three years and nine months in prison for the crime of aiding a terrorist organization.[4] The court stated that the violation resulted from the law and applied the pilot decision procedure. In this context, he notified a copy of the decision to the TBMM and requested that the law be amended within a year. During this period, it decided to hold the applications made on the same subject. Although this decision of the Constitutional Court should be regarded positively it should also be noted that it is marked with several problems. First of all, it should be noted that this decision was taken quite late since the application is dated 2014. Secondly, on the same issue, at the case of Işıkırık v. Turkey, the European Court of Human Rights decided in 2017 that the article 220/6 of TCK was unpredictable and did not comply with the principle of legality.[5] Regarding the implementation of this decision, the Committee of Ministers of the Council of Europe stated that Turkey did not fulfill its obligations.[6] Four years after the ECHR’s decision, the Constitutional Court decided that articles in question were unpredictable and that local courts interpreted these articles way broadly, leading to severe punishment of those who exercised their constitutional right to assemble.

Although the Constitutional Court determined that the violation was caused by the law, it did not choose to appeal against the law as the court that handled the case as the article no. 152 of the constitution entitles it to do so. Constitutional Court could have made an annulment decision by examining the law directly through objection. However, there is no provision in the legislation on how the TBMM will implement this decision. It is not clear who is responsible for proposing legislation. In this regard, an amendment should be made to the Parliamentary bylaws and the procedure for the implementation of the Constitutional Court’s decisions should be regulated. However, the main problematic aspect of the Court’s decision is that it holds the examination of the applications on the same subject for one year, while it did not take any temporary injunction regarding the suspension or postponement of the execution of those sentenced under the relevant provision. In this case, people who are sentenced based on this provision will continue to be deprived of their freedom for one year despite the fact that the provision in question does not comply with the principle of legality which has been determined by both the Constitutional Court and the ECHR. Moreover, even if the law is amended by the TBMM in due time, it is not clear how these people will benefit from the amendment. When they request a retrial based on a change in law, it is not possible to punish these people by the new law. The rationale behind this argument is that when even if the act of crime is defined more lucidly in line with the Constitutional Court decision, the acts of individuals who request a retrial cannot be prosecuted and punished according to the new law. Because in this case, it would lead to apply the penal law retrospectively, which would be inconsistent with the Constitution. Therefore, suspending the applications of persons who have been sentenced according to an unpredictable rule for one year is, indeed, without foundation. This decision itself will cause the violation of the rights of individuals.

[1] The Constitutional Court applied for the “pilot decision” procedure, which is stipulated in article no. 75 of the bylaw, for the first time in a decision made in 2019.