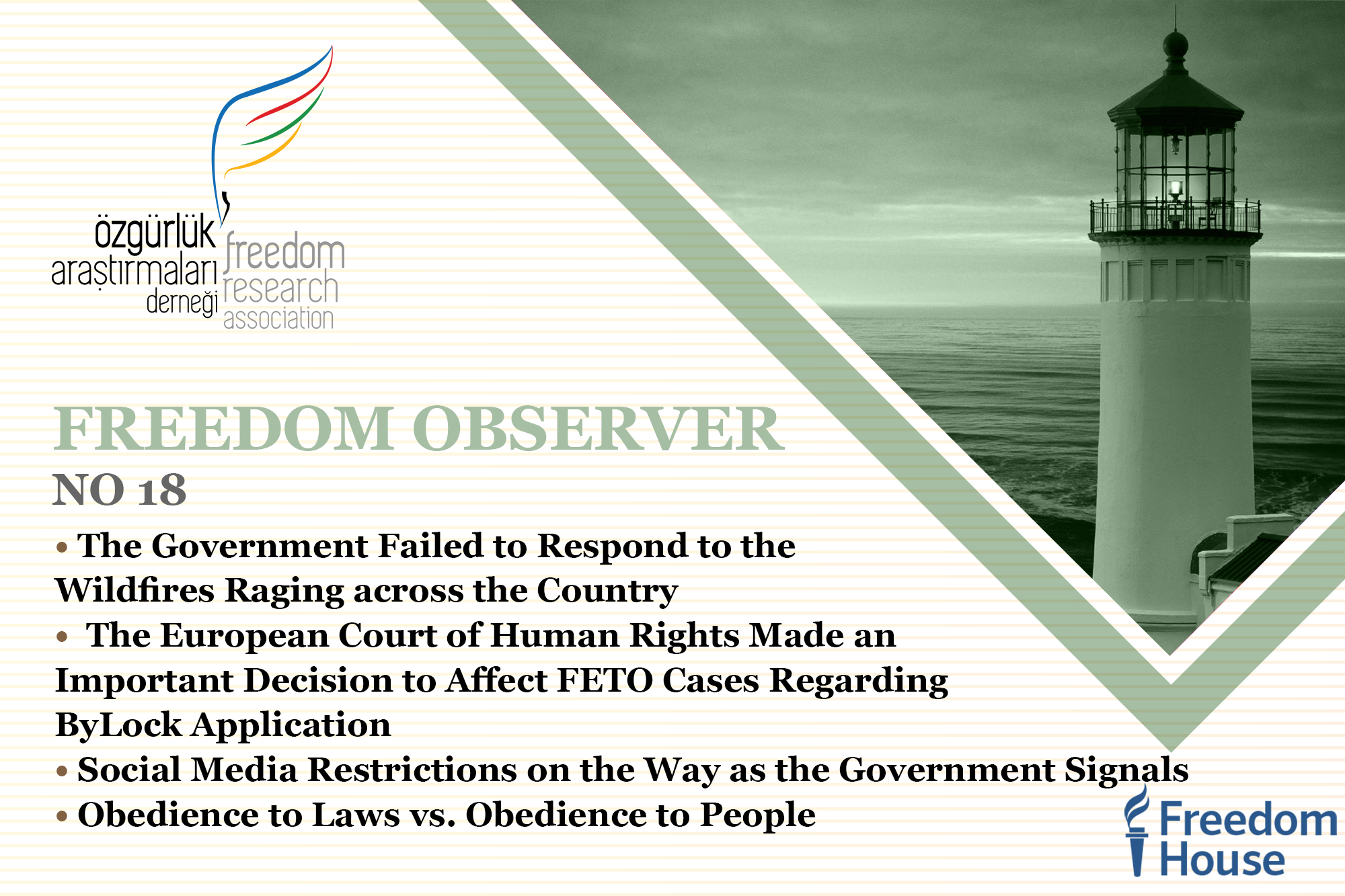 Turkey has been trying to cope with the wildfires disaster that has besieged the western and southern parts of the country for about ten days. Although wildfires are a problem that the country encounters almost every summer, this one differs from the previous ones in that they all occur, more or less, at the same time and cover a much larger region, and the government’s response to this situation was highly inadequate. Unfortunately, the government was incapable of fighting against the series of fires that started in Manavgat and spread rapidly to the surrounding settlements, and then spread around Muğla, especially Marmaris. The government failed to demonstrate a rapid, technically equipped, and effective crisis management. It turned out that the government was not even prepared for such a disaster despite wildfires had become routine of the summer months. This incident showed that the government is incapable of even fulfilling its basic duty of protective administrative services, or worse, displayed irresponsible administration, while spending the resources of the public on issues such as keeping citizens under control, distributing rents to its supporters, and imposing a lifestyle on people.

We see the latest example of the government’s effort to keep the society under control and to prevent all kinds of civil initiatives in the preparation of a law that seems to bring about serious restrictions on social media. As if it was not enough for the great extent of traditional media (TV and newspapers) to be under the control by the government , in recent years, people’s free communication and interaction on social media  has been tried to be prevented. The government does not give up on its unfettered desire of a country, where no criticism is directed against itself and the society sees everything that happens through the eyes of the rulers.

In terms of human rights, the most important development in recent weeks is the European Court of Human Rights’ announcement of the ByLock decision. In its decision dated July 20, the Court decided that the “right to freedom and security” of a citizen who was detained as a “FETO” suspect for downloading the ByLock application on his phone, although there was no evidence for a reasonable suspicion that the citizen committed a crime, had been violated. The Court’s decision will set a precedent for other victims, possibly for thousands who have been arrested and/or convicted on the same grounds as the applicant. Another significance of this decision is that it emphasizes the crucial fact that the state of emergency does not give blank checks to the public authorities for arbitrary detention.

As we have mentioned before that Turkey was envisaged to undertake the task of protecting Kabul Airport after the withdrawal of US military forces from Afghanistan. It is said that the population flow from Afghanistan to Turkey in recent weeks, which is not clear whether it is “migration” or “asylum”, is the result of a secret agreement between the USA and Turkey. It is of utmost importance that Turkey resolves this issue in accordance with the requirements of human rights. Unfortunately, the government has shown once again that it is far from a transparent and responsible administration approach in that it avoided informing the public about the truth of the matter in this issue as well.

The wildfires, which started on July 28 and broke out in 34 provinces to date, continue to cause great damage to nature. Fires have been brought under control at more than 217 points, but fires continue to accelerate at a great pace in many districts.[1] 9 people died in the fires.[2] Thousands of hectares of forests were destroyed, while many animals lost their lives or habitats.

An early intervention, which was deemed to be necessary, could not be made to the fires that started in the southern provinces. Since it is difficult to reach the forested areas by road, experts stated that aerial intervention is necessary. However, the government was not successful in airborne intervention. This situation again revealed Turkey’s lack of institutional capacity against fires and natural disasters in general.

Minister of Agriculture and Forestry Bekir Pakdemirli stated that “we (the government) do not have firefighting aircraft and helicopters in our inventory.”[3] He said that the supplier of the current aircraft is the Turkish Aeronautical Association (Türk Hava Kurumu, THK) The THK, on the other hand, has become the focus of discussions, after which the Minister claimed serious allegations, due to the lack of sufficient number of firefighting aircraft and the inability to use the existing ones due to lack of maintenance. Cenap Aşçı, who is the head of the trustee committee appointed to THK, stated that an investment of 4 million dollars must be made in order for the aircraft to be able to fly. On that note Asci claimed that an institution with a debt of 1.5 billion TL has no chance to invest in a tender that it has not received.[4] On the other hand, it was claimed that 1.3 million liras were paid daily for three planes leased from Russia.[5]

It is inexplicable on the government’s side that why the government does not keep important fire extinguishers under the Ministry of Agriculture and Forestry despite spending billions of dollars on many mega infrastructural projects.  It is, indeed, an utmost worrying question that why the government did not invest in aircraft to make them flyable for a few million dollars in THK, where it has appointed a trustee. Moreover, President Erdoğan argued that “municipalities are responsible for fighting against fires in residential areas”.[6] It is also not acceptable for the government to shift the burden of responsibility that reached at a status of national disaster and require coordination to municipalities with an obvious lack of capacity. In this regard, it should be noted that the primary responsibility for fires lies with the government. On the other hand, suffice it to claim that the main opposition party deals with the issue with a more problem-solving perspective. For example, in a joint statement, 11 CHP metropolitan mayors announced that they are ready to cover the maintenance and operating expenses of THK’s aircraft.[7]

On 20 July 2021, the ECHR announced its decision on the individual application of a former police officer, who was arrested for using ByLock only, and decided that some of the rights of the applicant, which are guaranteed by the Convention, were violated.[8] Firstly, in examining whether the detention was lawful or not, the Court recalled that there must be evidence to justify reasonable suspicion that the person committed a crime at the time of arrest. In this context, it firstly determined that there was no evidence other than the use of the ByLock application on the date of 17 October 2017, when the applicant was arrested. Reminding that the local court did not have sufficient information on the use of the ByLock application exclusively by the members of the organization at the relevant date, the Court stated that the applicant’s arrest was not lawful for the mere claim of using this application. The Court emphasized the fact that the application was downloaded alone cannot be considered as sufficient evidence unless it is supported by other evidence showing that the person has committed a crime. Pointing out to the fact that the criminal court of peace, which ordered the arrest of the applicant, referred only to the provision of law without revealing the concrete evidence that gave rise to strong suspicion that the applicant committed a crime. the Court also noted that abstract and general references to the provision of law cannot legitimize the “reasonableness” of the suspicion. The Court recalled that this shortcoming in the decision of the judge was not remedied by either the judgeship examining the applicant’s objection or the Constitutional Court examining her individual application.

On the other hand, the Court stated that reasonable suspicion, which is mandatory for the first detention, is an indispensable requirement for the decisions regarding the continuation of the detention. In that regard, the Court decided that Article 5/3 was also violated. Finally, it concluded that the only evidence for the applicant’s arrest was that the applicant’s name was on the red list of ByLock users. However, the applicant or his lawyer were not allowed to access the investigation file until the indictment was launched, and that he could not use his right to appeal effectively against the arrest decision. This also violated the Article 5/4 of the Convention. It is understood that the Court, which has not found a violation in terms of access to the file in similar complaints before, has tendency to turn away from this approach as well. Although the Akgün decision of the ECHR is related to detention, it is an important sign that many convictions given in FETO cases are in violation of the Convention.

Social Media Restrictions on the Way as the Government Signals

One can understand the state of Turkey’s current economic management with a short story of the historian Herodotus. According to Herodotus, a meeting will be held between the Hellenes and the Persians. The Hellenes go to meet with the Persian King Xeres. The king’s mother welcomes the Hellenic delegation and asks them a question, “We obey my son Xeres. Who do you obey?” The Hellenic delegation replied, “We obey the laws of our city, not individuals!”

Dozens of centuries after the story told above, President Erdogan, the head of the executive branch of the Republic of Turkey, calls for Central Bank to lower  interest rates by saying, “I must have been giving the signal to certain places,”[10] referring to Central Bank, whose independence is determined by law. Although Erdogan said that he did not give a signal, it is now a widely-known fact that this discourse is not a signal but an order. The dismissal of Central Bank governors who do not obey Erdogan’s orders in the middle of the night is what the Turkish public is used to.

Erdogan not only gives messages from his own media outlets, but also repeats the view that “interest rate is the cause of inflation”, which has been proven wrong dozens of times. During his speech, he uses exactly the following sentences: “we will see a decrease in inflation in August, but what will be the rate of this? It would be far, far below from where it is at now. I must have given the signal for this to certain places. Because it is not possible for inflation to go higher from now on. Because we go into a decrease in interest rates once and there is no high interest rate. Because high interest will bring us high inflation, but low interest will bring low inflation. August is the breaking point and we will hopefully move to low inflation in August.”

Households and companies with high indebtedness bear the brunt of all these baseless promises. After every statement Erdogan made about the interest-inflation relationship, the dollar rose in a short time. As a matter of fact, when the markets opened on Monday, August 5, which is the first trading day after Sunday, August 4, 2021, when this speech was made, the dollar suddenly rose from 8.47 levels to 8.56 levels. After reaction sales for a while, it rose above 8.60 levels again. Perpetuating the argument that “interest is the cause of inflation”, we experience yet another example of how a single word from one person’s mouth can impoverish all citizens at the same time.