Özgürlük Araştırmaları Derneği
Ana Sayfa Blogs The Report on the Media-Building for Democracy: Strating from Scratch, A... 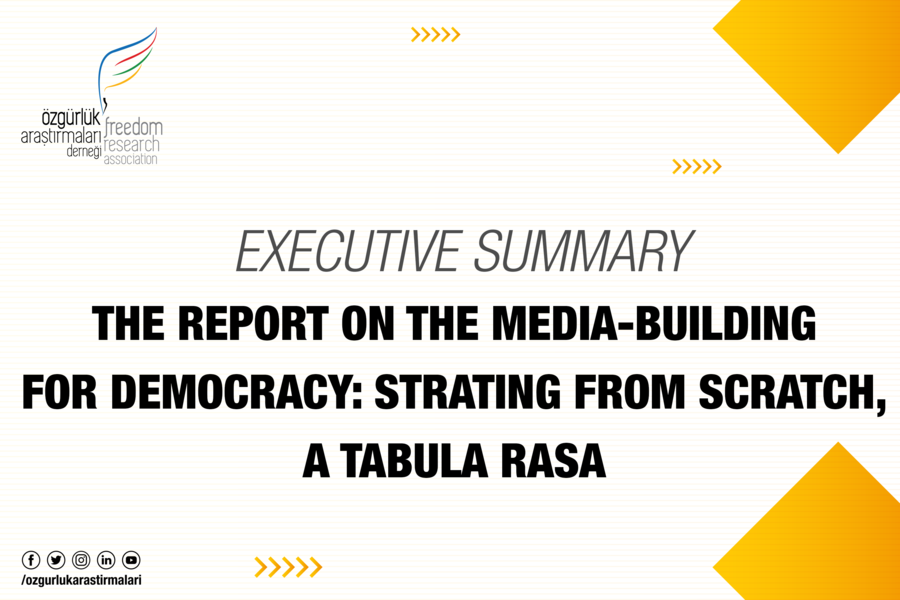 Turkey has been facing a serious decline in rule of law, democratic governance, freedom of media, and judiciary independence shown in the international objective indexes. That is why Turkey needs to execute relevant necessary reforms as soon as possible. The Project of Structural Reforms in Turkey has been launched by Freedom Research Association with support of the National Endowment for Democracy and Friedrich Naumann Foundation Turkey Office to identify and concretize existing problems in the mechanisms of the Legislation, Judiciary, Public Procurement Regime, Public Personnel Regime and Media Independence, which are the main political mechanisms in Turkey. Within the context of the project, alongside discussing existing issues in the relevant institutions, it has been focused on the steps that immediately need to be taken and proposed advisory solutions for structural reforms. The report, which is titled “Report on the Media-Building for Democracy: Starting from Scratch, A Tabula Rasa” prepared by Derya Sazak, a journalist evaluated the main problems, emerging risks, and possible solutions as on the current media in Turkey.

Journalists act as mirrors to witness history and reflect events in their country. Therefore, journalism and media are one of the important professions in the history of countries. The media representatives have never been independent, and positioned itself against the power, and dominant central powers in the history of Turkey apart from that some examples, which are considered to be honor and pride of the journalism in the 1960s and 1970s when the newspapers were in searching of truth rather than served as the government agency. Moreover, it is not possible to state that there is a journalism understanding that does not support the norms and status quo in Turkey. Considering the current situation, it would not be a mistake to express the current situation much worse than before. There are various reasons for this setback. One of the reasons is, because of the high pressure, the media organizations are not able to act independently and freely.

Documentation, press, other media tools have been faced censorship and oppression by the political, military, and capital powers in Turkey for years. In addition, capitalists and investors’ involvement in the mainstream newspaper and television sections have created an interdependent structure. There was a triangle relationship between newspaper-television-bank structures where the capital owners exercise their power on the media groups until the 2000s.  A trend for the capital owners was to possess the television, newspaper, and the bank. Today, the form of structures and relationships have slightly been changed: the political powers became an important part of the media, and the understating of managing media has been embedded based on the profit and loss account, and annuity-tender and public resources. Undoubtedly, this situation affects not only the media ownership structure but also the media professionals directly or indirectly and causes them to move away from the principles of the profession. Media owners and media professionals are highly affected by this political atmosphere and dependence to the power and power centers. Moreover, the current crisis of the media in Turkey, unlike the Western US, Europe, and the UK, the media institutions become managed by the weak companies that seek public loan incentives.

The fact that the mainstream media is intertwined with power centers keeps the question of how to do journalism for the sake of public interest alive. With the developing and changing technology, alternative media trends have emerged and is growing day by day. Alternative media trends have an important place in seeing the innovations and being able to provide both moral and financial connection directly with the readers. On the other hand, there is a need of making a new law to define the roles and responsibilities of the media structure. Alternative media and digital channels should also be included, and ethical principles be embedded in the law. The foundation of the newly growing alternative media must be well-established as well in a way that, thus, it can be prevented that the fate of alternative media would be similar to the traditional mainstream media. One of the other challenges in the media sector is that the political climate is not very supportive to have a free and independent approach, and difficult to see the pluralist understanding.  Referring to Turkey, media seems to represent the certain groups and structures that priorities their policies.

However, this structure is far from the principles of pluralism as it is surrounded by ideological barriers.

In order to understand the situation of freedom of expression and freedom of the press, it is useful to look at the state of the opposition media. Turkish Radio and Television Supreme Council, one of the mechanisms that restrict the opposition media’s activities and broadcasts in Turkey. Turkish Radio and Television Supreme Council as a public institution do not operate independent operations in inspecting radio and television. Since its establishment, it has been one of the mechanisms used by the government in directing and affecting the society, which is not neutral and independent actions according to the regulations during the AK Party period. The government has turned it into a mechanism that controls the media on behalf of politics, due to the reflection of the distribution of power in the parliament to its management and authority-sharing. The repressive mindset and policies of the Turkish Radio and Television Supreme Council deeply affect the opposition media and make them incapable of due to the high penalties imposed on their actions.

The quality and working environment of media professionals is another factor that affects and shapes the media.  The media professionals could not be able to conduct the job, if an impartial, independent, free and secure environment is not to be provided. Due to high pressure by the political powers, journalists do not act independently, that creates a fear of losing their job. Also, there is no working system and environment that guarantee the personal rights and benefits of journalists. For this reason, it is important to provide a habitat where media professionals do their works without facing any type of pressure. Furthermore, journalism in Turkey does not meet the necessary requirements of quality, ethics, and professionality, which are necessary rules that need to be realized. For example, there are no certain differences between news and opinions; reporting has been seen as an underqualified role so that the reports become columnists. That is why the current situation of the communication faculties should be reconsidered since there are very fundamental problems and challenges in the sector.

Further suggestions have been made in the reports as follow: