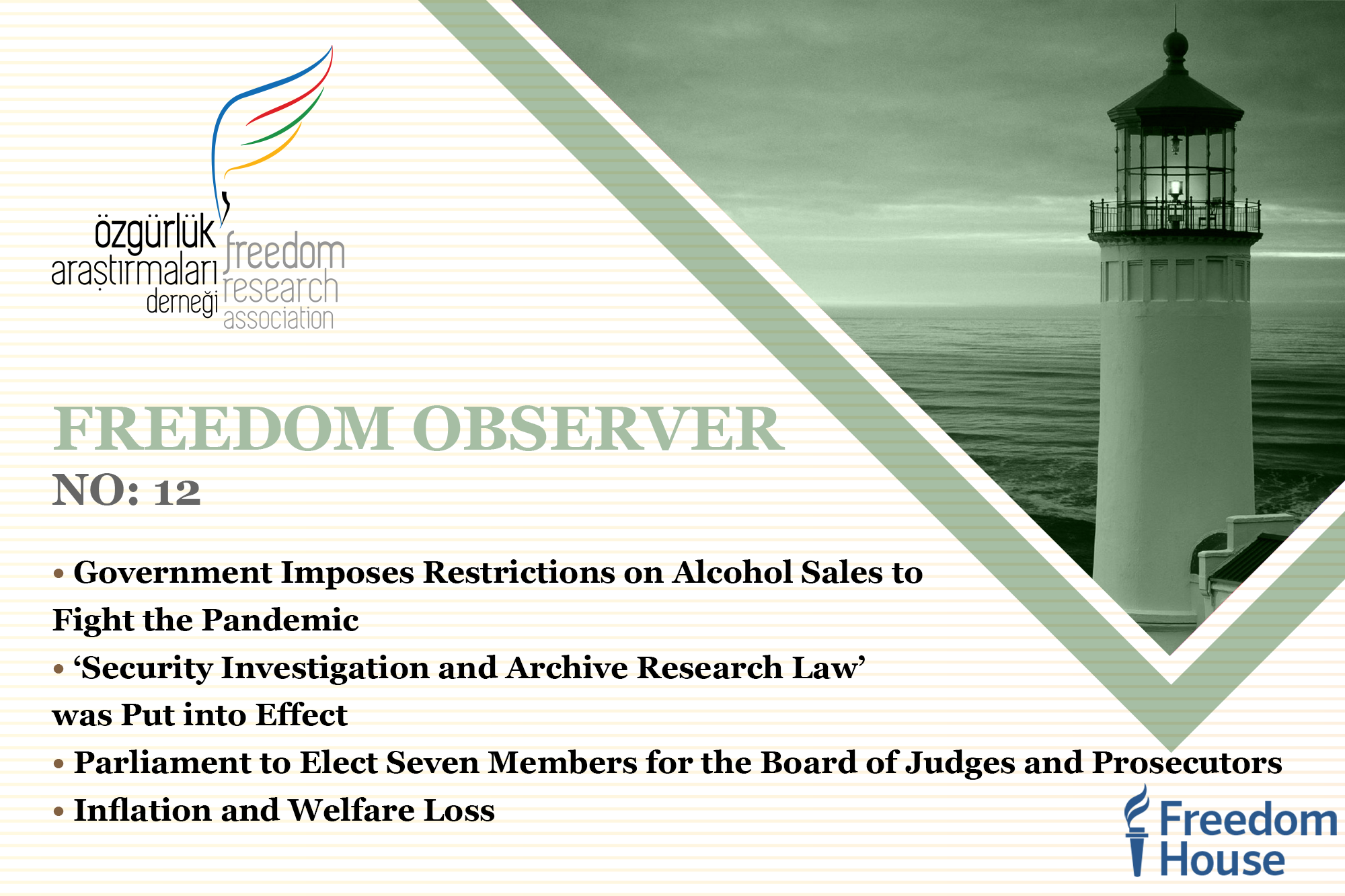 “Considered together with the heavy taxes and measures imposed on alcoholic products in recent years, the government’s failure to give a satisfactory answer to the question of how full-scale ban on the sale of alcohol would be effective in combating the pandemic causes a justified concern whether the government’s rather restrictive alcohol policy would constitute a “lifestyle intervention” in the public opinion.”

The twelfth issue of the “Freedom Observer” is now available on social media!

Government Imposes Restrictions on Alcohol Sales to Fight the Pandemic

Within the framework of the full lock-down measures to be implemented in Turkey between April 29 and May 19, the news has been circulating in the social media that liquor stores will be closed as they are not counted among the exceptions announced by the government, which means that there will be no liquor sales throughout the country during the full lock-down period. However, in the Circular Letter on Total Closure Measures sent by the Ministry of Internal Affairs to 81 provincial governorships, there were no restrictions mentioned on liquor sales within the scope of lock-down measures.[1] On the other hand, Minister of Internal Affairs, Mr. Süleyman Soylu, stated that this restriction is not different from the restrictions on the sale of alcoholic beverages on weekends, thus the rule is the same; only this time the restriction period is longer.[2] The restrictions, which were imposed without any legal basis, received harsh reactions from the public, lawyers and non-governmental organizations. Since the restrictions lacked a legal basis, sales of alcoholic beverages continued in various parts of the country on the first day of full lock-down process. In fact, the president of Turkey Liquor Stores Platform, Özgür Aybaş, stated that the de facto ban was lifted on Friday, April 30.[3]

The government, however, seems determined to restrict liquor sales despite objections from the public and the liquor industry. The Minister of Internal Affairs stated that “all the decisions taken by the Provincial Sanitary Boards about the restrictions on liquor sales are shared with the relevant institutions and the public through the governorships.” By stating that the Minister implied that decisions that are taken verbally by the Ministry can, in fact, put into an effect by Provincial Sanitary Boards and governorships.[4] Following the Minister’s statements, Antalya Governorship announced on Friday, April 30, with the decision of the Provincial Sanitary Board that liquor stores will be kept closed throughout the province and sales of alcohol products will be banned in places such as markets, grocery stores and buffets during the full lock-down period. In addition, it has been stated that the persons who do not comply with the decision will be notified to the judicial authorities for the necessary judicial proceedings in accordance with the phrase “… a person who does not comply with the measures taken by the competent authorities is sentenced to imprisonment from two months to one year” of the  Article 195 of the Turkish Penal Code.[5] In the following days, governorships in many provinces took similar ban decisions.

It should be noted that it is unlawful for the government to prohibit the sale of liquor by administrative decisions since the decision lacked a legal basis. In the same manner, attempts by law enforcement to impose punishments on places that sell alcohol are within the scope of unlawful orders. In addition, as the administrative lawyer Metin Günday stated, a full-scale prohibition of liquor sales, albeit by law, would contradict the “principle of proportionality” and Article 13 of the Constitution.[6] On the other hand, considered together with the heavy taxes and measures imposed on alcoholic products in recent years, the government’s failure to give a satisfactory answer to the question of how full-scale ban on the sale of alcohol would be effective in combating the pandemic causes a justified concern whether the government’s rather restrictive alcohol policy would constitute a “lifestyle intervention” in the public opinion.

‘Security Investigation and Archive Research Law’ was Put into Effect

The Security Investigation and Archive Research Law, which the government attempted to bring to the agenda of the parliament several times, was published in the Official Gazette on April 17, 2021 despite the fact that the proposed law did not secure enough votes to discuss its provisions in the General Assembly of the Parliament.[7] The fact that the Law was put into effect beyond standard parliamentary procedures, the situation worsened when considering the fact that the Constitutional Court annulled twice the related provisions of the security investigations prescribed in the emergency period decrees that had been put into effect during the state of emergency period after 2016.[8] The proposal no. 220 regarding the Security Investigation and Archive Research Law no. 7315 was discussed at the 66th meeting of the General Assembly of the Turkish Grand National Assembly on March 31, 2020 and did not get enough acceptance votes regarding the transition to the discussion of articles of the proposal. It should be noted that according to the TBMM Rules of Procedure, proposals that are not accepted for discussion of the articles are considered rejected. Moreover, according to the article no. 76 of the TBMM Rules of Procedure, at least one calendar year must pass before a rejected proposal can be brought back in the same legislative term. Nevertheless, the Presidential Board of the Turkish Grand National Assembly convened on April 1, 2021 and decided to continue negotiations and discussions on the proposal despite the opposition parties’ objection. As a result, the proposal was accepted by the votes of the AKP and MHP deputies. The Republican People’s Party (CHP) applied to the Constitutional Court on the grounds that the Law on Security Investigation is null and void and unconstitutional in terms of form.[9]

The Security Investigation and Research Law is also criticized on the grounds that it contains significant uncertainties in terms of its content, and that it will lead to arbitrary practices and discrimination. In terms of which personal will be subjected to investigation, the law makes vague statements such as “those who are employed in units, projects, facilities, services … which have strategic importance in terms of national security”. Similar vagueness applies to the matters that are to be subjected to investigations such as “relations with foreign government institutions and foreigners; cooperation, liaison and contact with terrorist organizations established with the aim of committing crimes”. As such, the Security Investigation Law seems far from preventing arbitrary practices in terms of individuals’ right to enter into public service.

The term of office of the members of the Board of Judges and Prosecutors (HSK), whose structure was changed with the constitutional amendment adopted in the April 16 Referendum in 2017, will expire in June and the election process of new members has begun. The Turkish Grand National Assembly will elect seven of the 13 members of the HSK. Two of the remaining six members (Minister of Justice and Deputy Minister) will be natural members, and four will be directly elected by the President. Three of the places to be elected by the TBMM  will be chosen from among the members of the Supreme Court of Cassation, one from among the members of the Council of State, and three from among the faculty members and lawyers. According to Article no. 159 of the Constitution, a three-fifths (360) majority of the total number of members of the TBMM is required to be elected as a member of the HSK. Currently, the parties of the People’s Alliance (Cumhur İttifakı) do not have this majority in the Turkish Grand National Assembly. If the parties cannot reach an agreement, the members will be chosen by drawing lots between the two candidates with the highest number of votes. The Turkish Grand National Assembly accepted the applications of the candidates until April 22, 2021. According to the reports in the press, 118 applications were made for seven places. Of these candidates, there are 51 Supreme Court of Cassation members, 10 Council of State members, 14 faculty members and 43 lawyers.[10] The status of the candidates will first be examined by the Justice and Constitution Joint Committee and the appropriate candidates will be put to the General Assembly for voting. The Joint Commission held its first meeting and formed a sub-commission consisting of four deputies. However, the TBMM has yet to disclose the rules to be followed in the selection of candidates and the election criteria to the public. Therefore, candidates are faced with unpredictability as to what criteria the selection will be based on. There are news that the applicants include partisan references in their petitions in a way that is incompatible with the principle of ‘independence and impartiality of judges’.[11] An unconditional adherence to transparency and objectivity is of utmost importance in the selection of members of a board, which should be the guarantee of the rule of law and judicial independence.

TURKSTAT announced both domestic producer and consumer inflation figures, with domestic producer prices index (D-PPI) and Consumer Prices Index (CPI) on 3rd of May. According to TURKSTAT, the CPI for April 2021 increased by 17.14 percent compared to the same month of the previous year, and the increase was realized by 1.68 percent compared to the previous month. Health expenditures stood out the most in terms of consumer inflation. The inflation experienced by citizens for health expenses was recorded as 18.27 percent compared to the same month of last year. [12] It seems that the increase in the prices of health products and services will further strain people’s budgets during the pandemic period.

Much more serious increases were observed in D-PPI. It increased by 35.17 percent compared to the same month of the previous year, while the rate of increase was 4.34 percent compared to the previous month. There are two items to be considered in the increase in producer inflation. While the annual increase in energy prices was 38.64 percent, the annual increase in intermediate goods prices was 42.59 percent.[13] Considering the cost of these two items in the manufacturing sector, we can predict that these price increases will also be reflected in consumer prices in the coming months.

There are a few things we need to think about the causes and consequences of the numbers we have. As can be seen in producer prices, in the past year, there have been huge increases in many of the products and services used by the sectors in order to produce. One of the most important reasons for these increases is the exchange rate shock that Turkey experienced. Although it seems that only D-PPI has increased for now, its effects on consumers will be seen in the short term. The rise in value of foreign currencies against Turkish Lira was already creating problems for the supply of imported products to consumers. Naturally, price increases in goods produced in Turkey accompany this, and it seems that it will. All of these emerge as degrading effects on the welfare of citizens.

It is necessary to answer the question of how much of the problems here we have were influenced by the people who rule the state. Because the answer to this question will be essentially the answer to the following question: “Is the government reducing the welfare of citizens?” I think we can answer “yes” to this question. Because the government’s reckless use of its powers over institutions are often the sources of the exchange rate shocks that we experience. The disasters of the “New Economy Plan” during the Berat Albayrak period, the sale of 128 billion dollars of Central Bank reserves to wrongly protect the value of the Lira, and all wrong assignments and practices play an active role in reducing the welfare of the citizens of the Republic of Turkey. However, no government in the democratic system could have done so many wrongs in such a short time. Nowadays, we are witnessing the Central Bank again is looking for an opportunity to lower interest rates despite this inflation and foreign exchange prices. Again, instead of permanently eliminating the causes of the problems, we are trying to sweep them under the carpet.