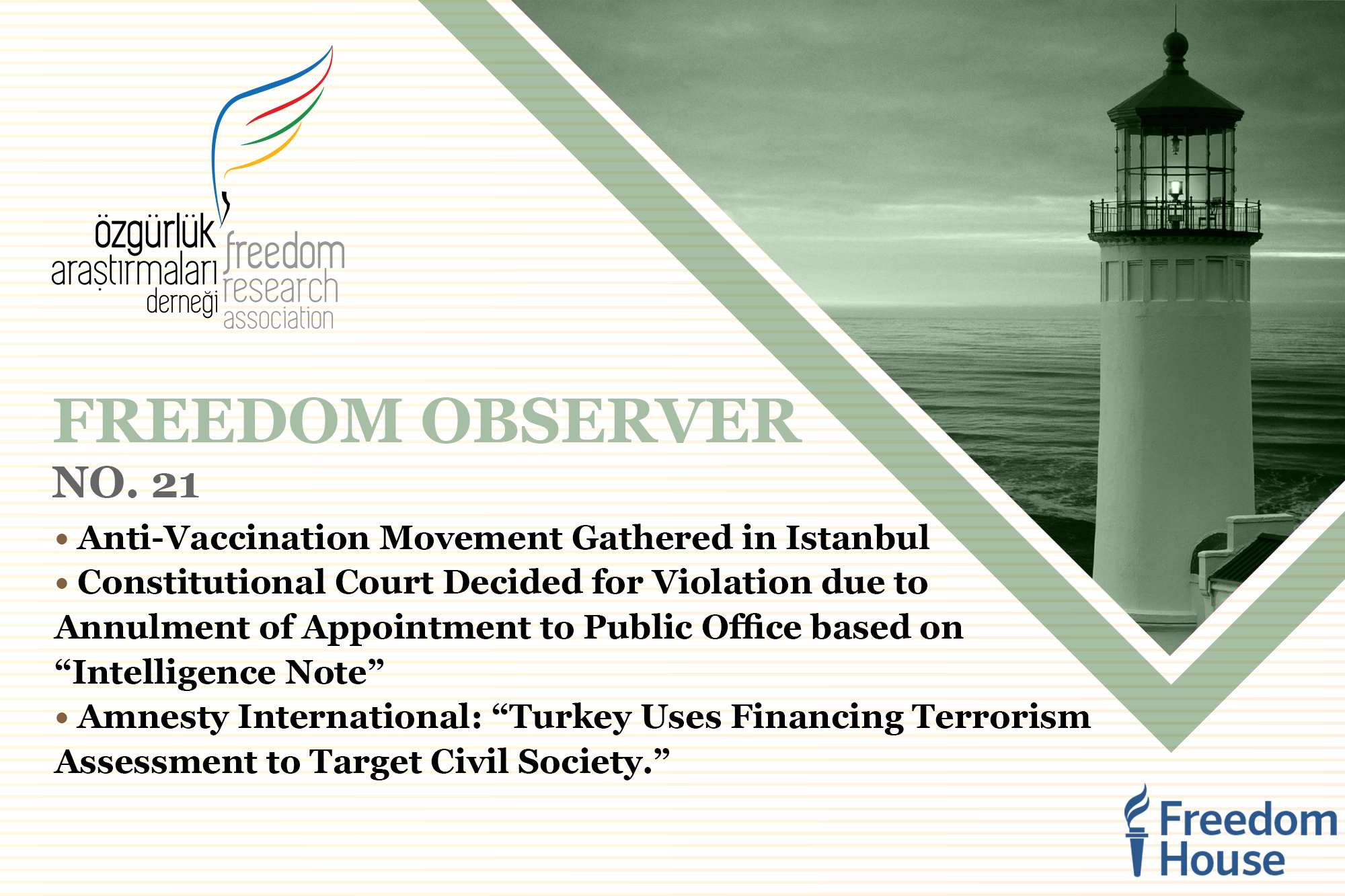 Most of the “new” topics that have come to the fore in our political agenda in the last two weeks are, indeed, related to the issues with which we are familiar for a long time. These issues repeatedly prove the point that Turkey is not a “democratic state based on rule of law and human rights”. Among the issues pointed out below, only the one related to “secularism” can be considered new in this sense, since it is not related to the issues that have been on the agenda for a long time.

The manner in which the anti-vaccine rally is held shows that the AKP administration applies different standards depending on the group of citizens who practice their right to assembly and demonstration as in other issues. As a matter of fact, in recent years, the government has generally not allowed citizens to exercise their right to assembly and demonstration. However. As the anti-vaccine rally showed that law enforcement officer did not interfere with the fact that protesters took off their masks during the meeting in a way that would threaten the general health, let alone checking negative test result, vaccination card and HES code. The government’s latest practice of double standards has reinforced the impression that it favors groups with which it ideologically sympathizes against the general good—in this case, public health.

In this Bulleting, the Constitutional Court takes its place with a new decision that is both pleasing and worrying at the same time. The court held that the judicial decision to uphold an administrative action that canceled a citizen’s appointment to public office on the basis of an “intelligence note” violated the person’s right to a fair trial. This is the pleasing part of the decision. On the other hand, it was disappointing that the Constitutional Court overlooked the violation of the “presumption of innocence” and the right to “develop material and moral existence”  (through the right to hold public office) for the citizen in question in this case. This attitude of the Court, as noted below, seems to be a new example of its general tendency that has become evident in recent years, to deal with applications for violation of rights with a procedural focus rather than examining the content of the issue in depth.

In the last Bulletin, we touched on an example of the AKP administration’s quest to control the sphere of civilian life, and now we are faced with a confirmation that this is not just an orientation of the government. Rather, the government is determined to do so. As a matter of fact, in its latest Report on Turkey, Amnesty International has determined that the “Law on the Prevention of the Financing of the Proliferation of Weapons of Mass Destruction” no. 7262, includes disproportionate measures that will make it impossible for individuals to exercise their fundamental rights to freedom of association. In other words, by misusing the concept of “terrorism” under the name of “preventing the financing of terrorism”, the Turkish administration is in fact subjecting civil organizations to a strict repression regime, contrary to its international human rights obligations. In this context, Amnesty International’s call on Turkey to align its anti-terror legislation with international human rights law is quite spot on.

Finally, voices have begun to rise from Islamist circles to “remove secularism from the Constitution” that they must have been encouraged by the fact that the AKP leadership has made a habit of exploiting religious values ​​and symbols in recent years in order to consolidate its own power. Ironic as it is, the positive aspect of this inexpedient demand is that it lacks the support of the majority in Turkish society, where the secular lifestyle has a strong and widespread base and is characterized by a pronounced religious-ideological pluralism.

A group that defines itself as ‘anti-vaxxers movement’ held a protest rally in Maltepe, Istanbul calling it “Great Awakening”. Attended by more than 2000 people, the group protested mask and test requirement, vaccine passports and vaccination program at the demonstration.[1] According to the Reuters news agency, the participants were not asked about the negative test result, vaccination card or HES application. According to other news sources, the police checked the masks at the entrance of the rally area, but the protesters removed their masks as soon as they entered the area.[2]

As it is well-known fact that anti-vaccination protests are held in many countries around the world. First, it should be noted that these protests are a democratic right. Criticizing and protesting public policies are part and parcel of democracies. However, the anti-vaccine protest in Istanbul once again exposed the double standard of the government towards mass demonstrations and marches. As a matter of fact, since March 2020, hundreds of protests were canceled on the grounds of the pandemic-related restrictions, and harsh interventions were made to those who participated in the protests. In peaceful protests such as the Union of Bar Associations, May Day and Boğaziçi University, law enforcement officers took a disproportionate stance and preferred to ban the protests altogether instead of applying measures such as controlling masks and distance of protesters. On the other hand, one observes that the Governor’s Office adopts a rather soft stance when it comes to anti-vaccine protests. Undoubtedly, intervening in this peaceful protest would mean violation of the right to protest/ However, allowing this protest to be held by risking public health should be seen as a weakness of the administration. As a matter of fact, the Turkish Medical Association made a statement condemning the double standard of the Governor’s Office.[3] It should be noted that the fact that public health measures were not taken in the anti-vaccine protest that put the public health at risk. On the other hand. physically interfering with the students protesting the appointment of Melih Bulu as the rector shows not only the administration’s weakness but also double standards taken toward protests.

In its General Assembly decision dated 20.05.2021 published in the Official Gazette on 10 September 2021, the Constitutional Court decided violation of the right to a fair trial regarding the İdris Ertaş application.[4] The applicant was appointed as a civil servant according to the results of the KPSS exam held in 2016, but this appointment was canceled based on the article 4 of the Decree Law No. 667 due to the intelligence note stating that  “PKK/KCK activity records were found about the applicant and he was evaluated among those with the potential for activity”. The action for annulment filed by the applicant against the annulment decision was definitively rejected by the administrative judiciary bodies. The intelligence note that the administration added to its reply during the trial was not communicated to the applicant and his lawyer, and his requests in this regard were not answered.

Within the scope of the right to a fair trial, the Constitutional Court examined the applicant’s complaints regarding the right to equality of arms, the presumption of innocence, the right to hold public office and property rights. In terms of the right to equality of arms, the Court found that the applicant, who did not have information and documents about the evidence alleged to have been obtained and added to the defense of the defendant administration, were not given to the applicant. In this regard, the Court stated that the applicant was not provided with sufficient opportunities to make an effective comment and appeal against these claims. Concluding that this shortcoming was not remedied at any stage of the proceedings, the Constitutional Court decided that the principles of “equality of arms” and “contradictory trial” were violated.

In terms of the presumption of innocence, the Constitutional Court gave a decision of lack of jurisdiction on the matter on the grounds that there was no case that could be considered within the scope of the presumption of innocence since no criminal investigation or lawsuit was filed against the applicant. The Constitutional Court has given a decision of lack of jurisdiction in terms of the right to enter public office on the grounds that this right is not regulated in the European Convention on Human Rights so that it is not within the scope of individual application. Finally, in terms of the complaint regarding the right to property, the Court decided that there was no need for a separate examination since a violation decision was made within the scope of the right to a fair trial. All these decisions of the court were given unanimously. As this case has shown that the Constitutional Court has never examined the substance of the applicant’s complaint regarding the annulment of his appointment based on an intelligence note, and has only decided that the right to a fair trial has been violated because the documents added to the defense of the administration were not communicated to the applicant. However, there are numerous decisions of the Constitutional Court and the European Court of Human Rights that unlawfully hindering the right to enter public office constitutes an interference with a person’s right to protect and develop their material and moral existence. In the concrete case, the applicant’s right to enter into public office was prevented based on an intelligence note that had no concrete basis. Moreover, the Constitutional Court did not examine applicant’s complaint on the grounds of lack of jurisdiction by ignoring its own case-law. It is clear that the assessment made in terms of the right to property is also wrong. Because the action subject to the violation of the right to a fair trial is the failure to provide the documents on which the administration’s defense is based, while the action subject to the property right complaint is the cancellation of the appointment decision. Therefore, the subject of the two complaints is not the same action, and a decision on a violation of one right does not eliminate the other complaint. Even if the relevant documents were given to the applicant during the trial, the property right complaint arising from the cancellation of the appointment would not have disappeared.

Amnesty International recently published a report entitled Turkey: Weaponizing Counter-Terrorism.[6] The report listed the problems brought by the Law on the Prevention of Financing of Weapons of Mass Destruction No. 7262 and its recommendations to the Financial Action Task Force (FATF).

The FATF was established within the OECD in 1989 to combat money laundering and to provide recommendations to states to guide them in preventing financing of terrorism. The Turkish Government claims that Law No. 7262 is based on FATF Recommendation No. 8 on non-profit organizations. The FATF published the Recommendation Comment Note for No. 8 in 2016, as the recommendation has been abused by member states before.

With the Recommendation Comment Note, states were obliged to comply with the following four steps; 1) Conduct a risk assessment of the nonprofit sector to determine which organizations may be at risk of financing of terrorism, 2) Review existing laws and regulations pertaining to nonprofit organizations to determine whether they are addressing the risks associated with terrorism financing, 3) Take focused and risk-proportionate measures in a way that will not restrict the legitimate activities of non-profit organizations in case of vulnerabilities found in a particular non-profit organization, , 4) Implement these measures in accordance with the obligations required by international human rights law. Turkey has prepared the Law No. 7262 without making any risk analysis and by interpreting the Recommendation No. 8 very broadly. With the Law No. 7262, disproportionate measures were introduced that would make it impossible to exercise the constitutional freedom of association. The FATF and its member states should oppose any abuse of Recommendation No. 8 by Turkey.

The following are the changes brought about by the Law No. 7262:

Recommendations to the FATF

Amnesty International encourages the FATF President and Secretariat as well as Member States to: