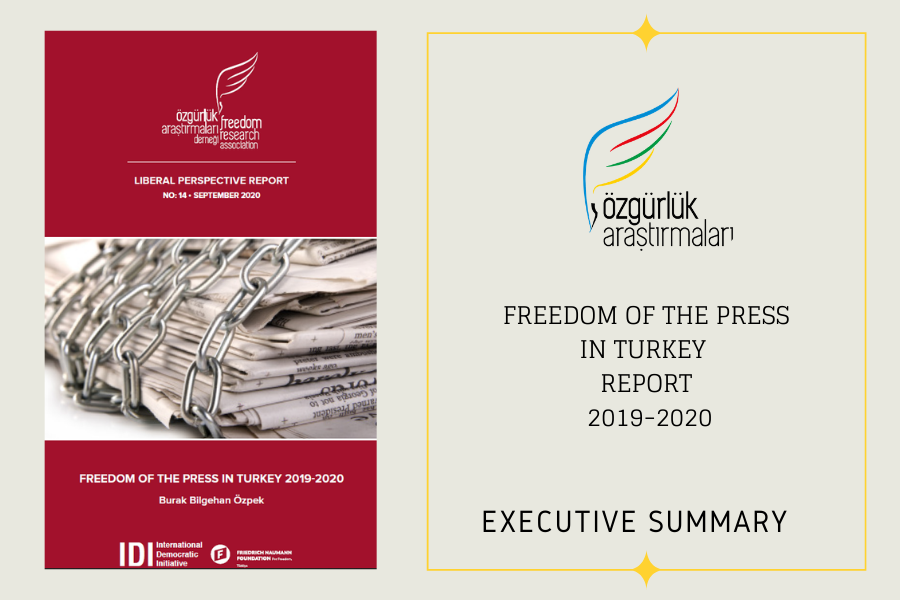 Turkey has performed increasingly poor in indexes focusing on freedom of the press and drifted to authoritarianism in recent years. Domestically, all critical groups complain about government’s pressure on media more than ever before. In this context, Freedom Research Association has been monitoring the state of the freedom of press since 2014. Our latest report is titled ‘The Freedom of Press in Turkey: 2019-2020 Report’ has been prepared by Burak Bilgehan Özpek with the support of International Democratic Initiative (IDI) and Friedrich Naumann Foundation Turkey Office (FNF Turkey). The Report is addressing the state of the press freedom in Turkey from January 1st of the year 2019 to June 21, 2020 as the completion date of the report.

The report has used three variables to perceive pressure on press organizations and journalists. The first variable, being described as “legal framework” and was demonstrating the pressure that the public authority was applying on press organizations and journalists leaning on its monopoly of violence. The second variable is “dependency framework” which was the economic dependency relation between the government and media organizations. This variable strengthens the argument that the relation between advertising policy of public institutions with the market economy was incompatible, and we could claim that the media owners’ broadcast policy was deter­mined under the shadow of the tenders which were won in other sectors thanks to the favour of the political power. Another parameter is related to the quality of the public debate within the framework of the concept of populism. The polarizing language in the media, the number of fake news and the prevalence of conspiracy theories are the concepts used in trying to understand the status of this parameter. In the last part of the study, positive developments in the name of media freedom were discussed and some solution suggestions were presented.

Especially after the Gezi Park Protests, the pressure on journalists and media organizations increased, and the judicial institutions started to act by supervising the political agenda of the government. With the end of the Solution Process, after the June 7, 2015 elections, this situation further expanded and reached its peak after the coup attempt on 15 July 2016. Presidential impact on the bureaucratic system has dramatically increased immediately after Turkish citizens approved the Presidential system by going to the poll at the State of Emergency. The main point that makes this situation problematic in terms of freedom of expression is that President Recep Tayyip Erdoğan is the Chairman of the Justice and Development Party at the same time. Thus, the legal entity of the state and the political agenda of the AK Party have been mixed into each other. In other terms, any discourse or policy that may harm the political future of the AK Party turns into a crime against the state or a threat to national security. Since the summer of 2018, when the economic crisis started, some newspapers which were published in national scale such as Vatan Newspaper, AMK Newspaper, Habertürk Newspaper, tar Newspaper and Güneş Newspaper, have ceased their publish. On the other side, it has been observed that the economic crisis has affected many local newspapers. The president of Journalists Federation of Turkey Yilmaz Karaca announced that 125 out of 1150 local newspapers ceased publish due to financial difficulties in the year 2019.

According to an announcement made by Journalists’ Union of Turkey on April 7, 2020, 85 journalists and media workers are in prison. More surprisingly, the arrests focused on the Gülenist Community and the Kurdish media after July 15, penetrated to Kemalist and nationalist writers. According to the Web Filtering report published by the Association of Freedom of Expression in 2019, until this year a total of 245,825 website have been blocked in Turkey. In 2018 alone, this number was 54,903. The most positive development of this period is that Wikipedia, whose access was blocked by the Information Technologies and Communication Authority on April 29, 2017, was reopened with the decision of the Constitutional Court on December 26, 2019.

It is possible to impose a media blackout in two ways. The first is courts, that is through the judicial power; the second is through the executive power, that is, the Presidency. According to the Radio and Television Supreme Council (RTÜK) data, 197 broadcast bans were imposed by the courts between 1 January 2019 and 21 April 2020, when the report was written. The most remarkable one among all was the decision that banned reaching any information about the course of events and casualties, particularly during the Syrian operation, to the citizens. Among the media blackout imposed by the Presidency, is the latest Çorlu Train Crash in 2018.

Between January 1, 2019 and April 20, 2020, RTÜK imposed a total of 1734 broadcasting suspensions, fines and warnings to broadcasting institutions. The most striking of these penalties is the one given to Fox TV, the most-watched main newscast of the country. According to the reports of Twitter Transparency, which are prepared in 6-month periods, during the first half of the year, Turkey ranked first worldwide in demand for content filtering. Turkish courts filed 388, and other authorized officials demanded 5685 content filtering. Twitter responded positively to only 5 percent of these demands. However, it should be noted that social media restrictions are not only de­manded by the state. Especially accounts described as “trolls” and attract­ing attention with their pro-government views act almost like social media patrols. These people resort to tactics such as suppressing, intimidating and dissenting opinions, as well as reporting twitter users to the Police Department.

The issue of media financing is an important indicator for understanding how free the media is and how loud alternative voices are against the official views of the political will. In recent years, newspaper sales in Turkey has declined considerably. Even though the reason for this is shown as digital transformation, de­creasing trust in the media and the readers’ inability to find newspapers expressing their attitudes also contributed to the low circulation. There is a big gap between the dealer sales and the circulation of the newspapers which publicly support the government because of that is purchases made by institutions managed by the state such as municipalities, public institutions and Turkish Airlines. The changes of some metropolitan municipalities, as a result of the 23 June 2020 local elections, has been another point that shows the relationship between newspaper circulation. Because, with the handover of the municipalities, there has been a change in the circulation of newspapers. This relation between political changes and circulation figures shows how effective the state power and the political will can be at financing the media.

In illiberal de­mocracies, governments exercise their control over the media using economic instruments. the easiest way to catch the control that the political power establishes over the media through eco­nomic tools is to detect the disproportionality between the rating level and advertising revenues of a channel. Nonetheless, in 2018, a decision was taken by the Television Monitoring Researches Agency (TIAK) not to report advertising expenditures any­more. With this decision, while it can be reached the data on ratings published by TIAK, it can be accessed the data on neither the number of advertisements given nor the company and television channels’ name. Avoiding transparency and blocking data flow in spending advertising budgets is quite meaningful.

While authoritarian governments control the media, they aim to manipu­late not only the flow of information but also the nature of public debate. By doing this, they aim to avoid meeting citizens and alternative voices and interpretations in society. Especially in illiberal and populist authori­tarianism, where the power is determined by elections, every moment of life passes under the pressure of a high-pace politicization. In Turkey, it is quite common in both traditional and social media to use polarizing language which di­vides the society into camps and destroys the civilized dialogue between them.

From January 1st of the year 2019 until June 21, 2020, the date this re­port was completed, the state of media freedom in Turkey maintained its negative outlook and it has been increasingly worsening. The fact that social media platforms are still open, the internet media meet with more and more viewers, and many metropolitan municipalities were won by the opposition party candidates in the last local elections, therefore, the in­ability to transfer money to pro-government media organizations through the municipality are the developments that can be considered positive of the period we left behind.

Monitoring The Rule Of Law And Democracy In Turkey

Challenge Of Freedoms With Covid-19 Bulletin