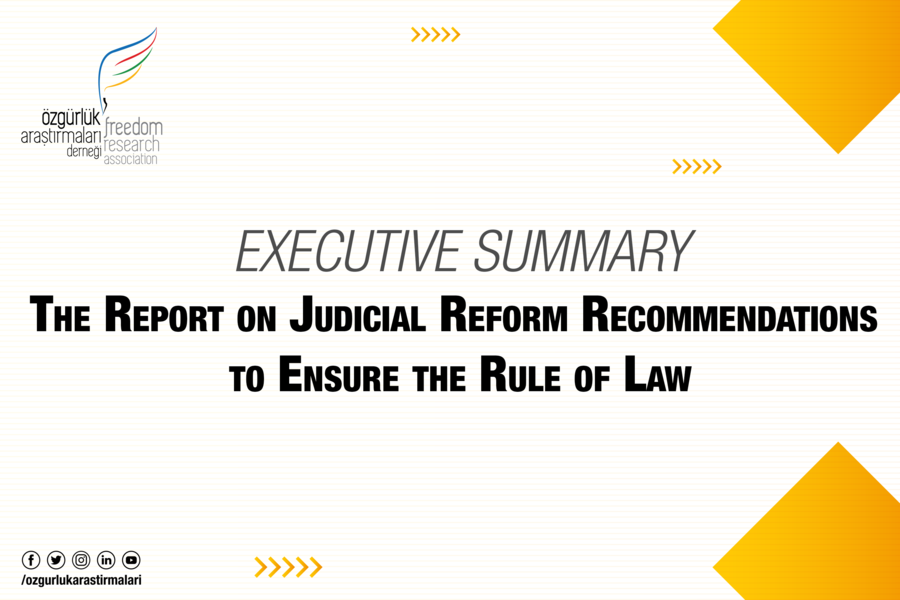 The Project of Structural Reforms in Turkey has been launched by Freedom Research Association with support of the National Endowment for Democracy and Friedrich Naumann Foundation Turkey Office to identify and concretize existing problems in the mechanisms of the legislation, Judiciary, Public Procurement Regime, Public Personnel Regime and Media Independence, which are the main political structures in Turkey. Within the context of the project, alongside discussing existing issues in the relevant institutions, it has been focused on the steps that immediately need to be taken and proposed advisory solutions for structural reforms. The report, which is titled “Judicial Reform Recommendations to Ensure the Rule of Law” prepared by Assoc. Prof. Ali Rıza Çoban evaluated the main problems and emerging risks within the framework of constitutional basis, checks and balances mechanisms, and legal principles.

Modern constitutions aim to distribute political power among different bodies and mechanisms at the horizontal and vertical levels. This horizontal power-sharing which is embodied in the principle of the separation of powers, in essence, means that the functions of law-making, ruling, and judging belong to different bodies. Supervising the actions of the legislative and executive bodies that comply with laws is under the authority of the judiciary. The objective of supervising the compliance with the constitutionality of legislative acts can only be ensured with an independent and effective constitutional control. For this reason, the body that will control constitutionality must have legal and structural guarantees that can act independently of the legislature and the executive mechanism.

Judicial independence constitutes the basis of the system of checks and balances. If there is no independent judiciary to balance other bodies, there would not be a system of checks and balances. That is why the independence of the judiciary is an indispensable condition of the rule of law. If a step is to be taken towards the restoration of the rule of law, the first thing to do is to ensure the impartiality and independence of the judiciary. Judicial independence refers to ensuring judges' impartiality and is an objective of the courts during the decision of cases. The only independent judiciary can effectively enforce the rights of all segments of society, particularly vulnerable and unpopular groups. The principle of independence is a fundamental requirement for the judiciary body to guarantee democracy and human rights in general.

Unfortunately, today Turkey’s judiciary is considered to be lost its status as a guarantee of the rule of law on a large scale. It is necessary to state that the judicial system in Turkey has literally never been considered to be qualified, independent and impartial in the past as well, however, it has not encountered such a dysfunctional and underqualified as today. In general, judges in Turkey have not been regarded to be agents, who guarantee individual rights and freedoms, and exercise the law equally to everyone, rather than tended to protect the state's interests. Because the concept of the rule of law is perceived as legality subject to the state. Unfortunately, the rule of law is not perceived as a notion that precedes the state; state comes first; however, it is actually an understanding prioritizing individual rights than the existence of the state, and therefore the state should be subject to.

Throughout history, including today’s judiciary systems that depend on the ideological fractions, on the one hand, it has created an ideological cauterization within the system, which prevents ensuring pluralism. Furthermore, it turned the judiciary into a political tutelage body. These practices have made the judiciary a force that needs to be captured and controlled by rival social and political groups and powers. The mean of controlling the judiciary has been seen as taking over the supreme judicial council, which is the governing and supervisory body of the judiciary. The structure and power of the supreme judicial council have become a vital area of political conflict, because it is a mechanism that makes decisions on the judges and prosecutors’ appointment, nomination, promotion, and disciplinary affairs, and has the authority to control both judges and prosecutors working in the courts of instance and members to be elected to higher courts. The political pressure of the council has played an important role in the making and amendment of the constitution.

When reviewing the prestigious and creditable indexes, it can be seen that Turkey is experiencing a serious decline. In fact, the situation is much worse in some sub-indicators of the indexes. At this point, it needs to be stated that the rule of law is not only a matter of routine operations of those who work in the courthouses but an overall national issue that requires to be well-considered and designed by the authorities. Because it is obvious that there is a direct connection between the decline of the rule of law and the economic indicators, investments, unemployment, quality of all public services like education, health, agriculture transportation.

Following the analysis of the current challenges of the judiciary in Turkey, practical-oriented suggestions have been conducted in the report.  According to the proposal in the report, to ensure the rule of law, the judicial structure should be reorganized in a way that guarantees the competence, impartiality, and independence of the judiciary. The other recommendations are being followed;