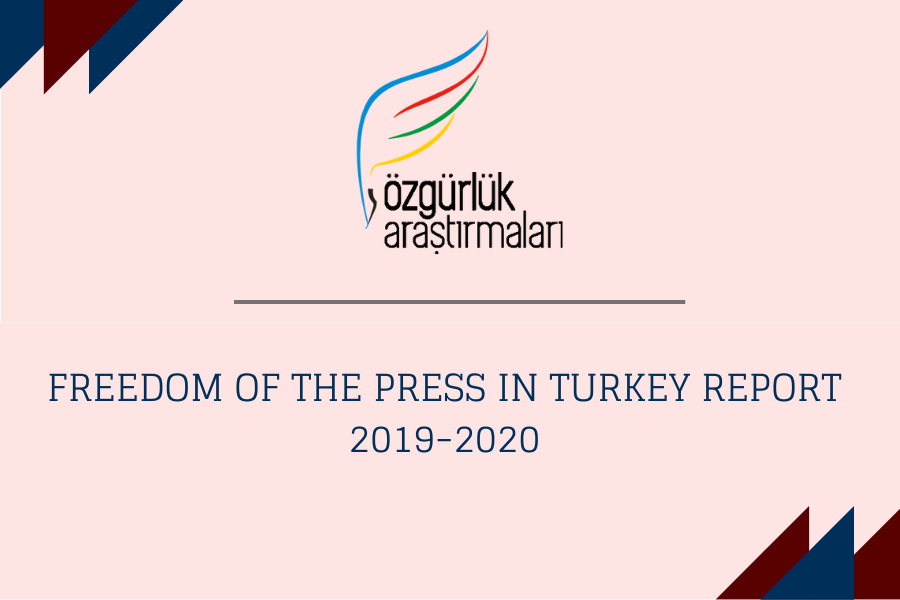 Turkey has performed increasingly poor in indexes focusing on freedom of the press and drifted to authoritarianism in recent years. Domestically, all critical groups complain about government’s pressure on media more than ever before. In this context, Freedom Research Association (FRA) has been monitoring the state of the freedom of press since 2014. Our latest report is titled ‘The Freedom of Press in Turkey: 2019-2020 Report’ has been prepared by Assoc. Prof. Burak Bilgehan Özpek with the support of International Democratic Initiative (IDI) and Friedrich Naumann Foundation Turkey Office (FNF Turkey). The Report is addressing the state of the press freedom in Turkey from January 1st of the year 2019 to June 21, 2020 as the completion date of the report.

The report has used three variables to perceive pressure on press organizations and journalists. The first variable, being described as “legal framework” and was demonstrating the pressure that the public authority was applying on press organizations and journalists leaning on its monopoly of violence. The second variable is “dependency framework” which was the economic dependency relation between the government and media organizations. This variable strengthens the argument that the relation between advertising policy of public institutions with the market economy was incompatible, and the media owners’ broadcast policy was determined under the shadow of the tenders which were won in other sectors thanks to the favour of the political power. Another parameter, “polarization”, is related to the quality of the public debate within the framework of the concept of populism. The polarizing language in the media, the number of fake news and the prevalence of conspiracy theories are the concepts used in trying to understand the status of this parameter. In the last part of the report, positive developments concerning the media freedom were discussed and public policy recommendations were presented.

The report was prepared both in English and Turkish. It was promoted through FRA’s website and social media accounts. Also, it was sent to 1900 subscribers and our international partners via the Mailchimp.

To launch the latest freedom of press report and to analyze the current state of the freedom of the press in Turkey, Freedom Research Association conducted an online conference on ZOOM on the 3rd of October 2020. An online conference was conducted to discuss the freedom of the press in Turkey based on the latest report. The conference was moderated by Assoc. Prof. Burak Bilgehan Özpek and the speakers were Journalist Nevşin Mengü (OLAY TV), Journalist Beril Eski (BBC Turkey and Daktilo1984) and Dr. Aydın Gündüz which are well-known journalists and academicians in Turkey. The conference was open to public and available from Zoom and Youtube. There was a simultaneous interoperation from Turkish to English. 100 people attended the conference on Zoom. Also, later the conference was uploaded to the FRA’s YouTube account and it has more than 500 views. Please check the video from the link

The third event held on the state of press freedom in Turkey was preparing a video. After the conference, a video, which is consisting of in-depth interviews with Burak Bilgehan Özpek, Nevşin Mengü, Beril Eski ve Aydın Gündüz, was published in FRA’s website and social media accounts. Speakers discussed the state of press freedom in Turkey and drew attention to the current state of the freedom of press and the freedom of speech.  The trailer of the video was launched on September 08, 2020 and it watched by 30.000 people on social media. To check the trailer

As a part of the final step, FRA pursued an online advocacy campaign to promote the report and to reach more people. Several types of bilingual infographics were prepared and shared on social media. The online advocacy campaign reached more than 200.000 people and got attention from the press and was on the news. To reach our social media content and the news about the project: