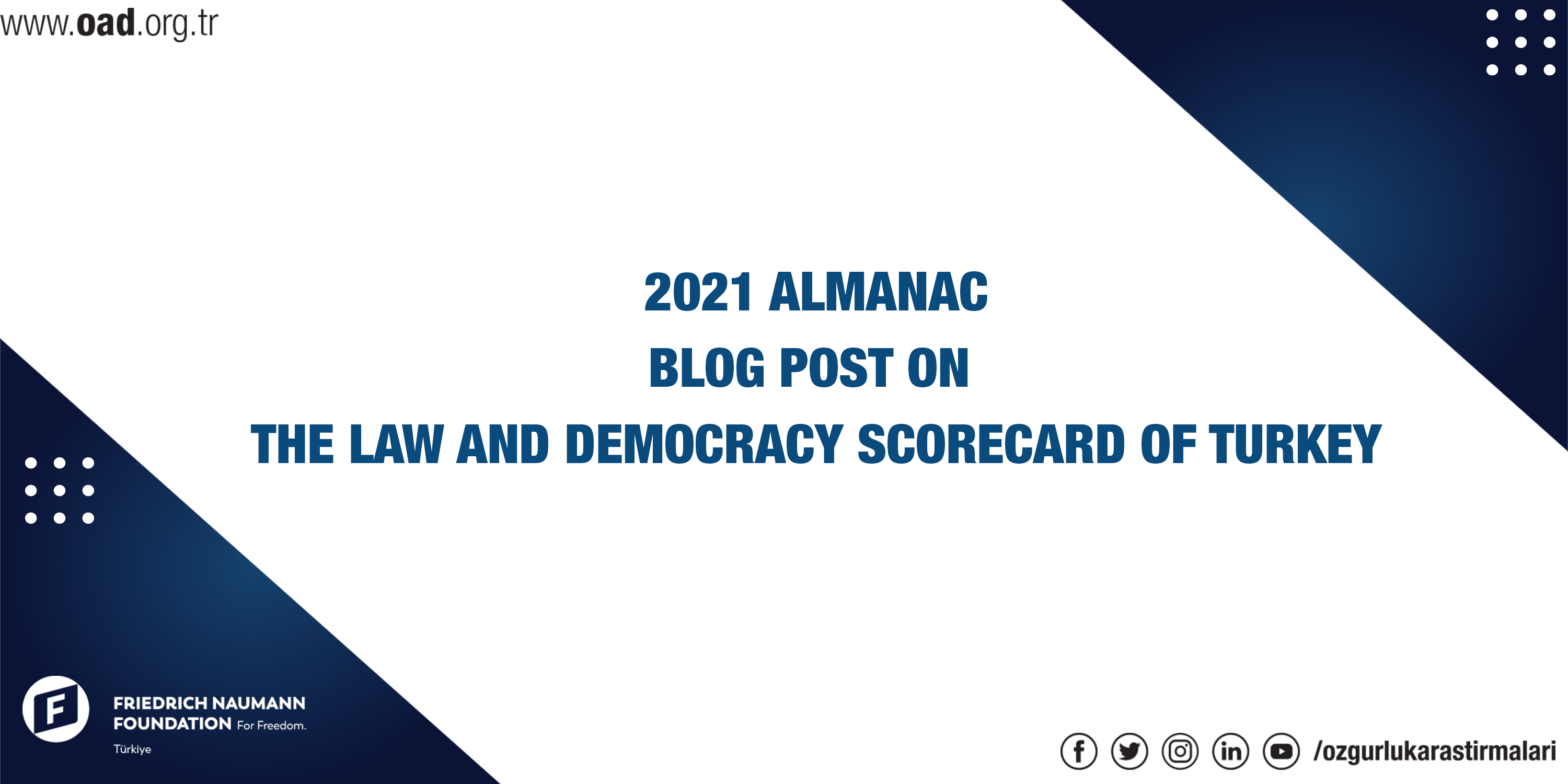 Our report titled “2021 Almanac: Rule of Law, Democracy, Social and Economic Freedoms in Turkey” where we, in cooperation with Freedom House, compiled the work from the Freedom Observer bulletins was published in 2022. These bulletins’ topics consisted of the most compelling events in the field of rule of law, democracy, social and economic freedoms and civil society in the years 2020-21. This blog will compile the key events that occurred in Turkey in terms of the rule of law and offer a perspective unique to the year 2022.

It wouldn’t be wrong to say that in the years 2020-2021 Turkey has been through a series of challenges and tests that may have lasting effects in fields of politics, economics, law, foreign relations and more. It is possible to read into the challenges Turkey faces in terms of law and democracy, through a variety of signs. The constitution being the result of a coup d’état, judiciary becoming politicized and losing trust vested in them, separation of powers coming to a point where it is not functional anymore, Turkey taking the place towards the end of the list in international human rights indices, checks and balances systems becoming dysfunctional, appointments made to establishments with political intentions and for many other reasons, it is possible to say that Turkey has faced a great decline in terms of rule of law and democracy.

We can define the main points from our observation in 2021 as follows: Problems with transparency, politicization of the judiciary, emergency decree, pressure on the political opposition, political rhetoric and operations aimed to increase societal polarization, withdrawal from the Istanbul Convention, Turkish authorities and courts ruling out the international law and standards. European Court of Human Rights’ (ECHR) verdicts on the imprisonments of Osman Kavala and Selahattin Demirtaş have not been implemented and detention of these individuals have continued. The president’s, Minister of Internal Affairs’ and the party leader of National Movement Party (Milliyetçi Hareket Partisi, MHP) Devlet Bahçeli’s statements on how they do not recognize these verdicts and they will not be implemented can be concerning and interpreted as evidence of executive pressure on the judiciary. Despite the pressures from civil society organizations, the European Council and other countries, the government did not sway towards the release of Kavala. On the contrary, towards the end of October 2021 President Erdoğan instructed for 10 countries’ ambassadors’ to be declared persona non grata because of their calls for the release of Kavala. As a result of the pressures regarding the Kavala case, in April 2022 Kavala was sentenced to aggravated life imprisonment; names like Mücella Yapıcı, Can Atalay, Çiğdem Mater were sentenced to 18 years of imprisonment as a result of “aiding” charges. In addition to this it looks like not implementing the ECHR verdicts on Kavala and Demirtaş cases will cause problems in Turkey’s relationship with the European Council.

Public authorities are obligated to make decisions in the face of crises such as natural disasters and war to protect the society and these decisions have to have a legal basis. However, when the public health practices of the pandemic are analyzed, we can see they have no legal basis. Actions were implemented through memorandums published by the Minister of Internal Affairs, usually without any constitutional basis. In a state with rule of law, these kinds of precautions certainly need to have constitutional basis. Long term curfews, curfews targeted towards citizens over the age of 65, restrictions on when to play music can be provided as examples of this kind of restrictions. Another interesting aspect of things is that while most restrictions were lifted in 2022, the music ban is still in place with certain changes. The fact that this ban that has no legal basis is still in effect, while all other restrictions are lifted, would not be acceptable in a state with rule of law. And it would not be wrong to say this approach is the exception.

The multidimensional period of regression Turkey has been experiencing for a long time has finally brought the country to a crisis almost impossible to resolve. And institutions and organizations losing reliability in the international arena lead to Turkey becoming an alone country. Especially the ever decreasing reliability on law and judiciary, concerns over the politicization of institutions and most importantly checks and balances losing functionality are becoming a hurdle in the way of Turkey becoming a democratic country with rule of law.