Özgürlük Araştırmaları Derneği
Ana Sayfa Blogs The Report on the Need For Reform in the Public Personnel Regime... 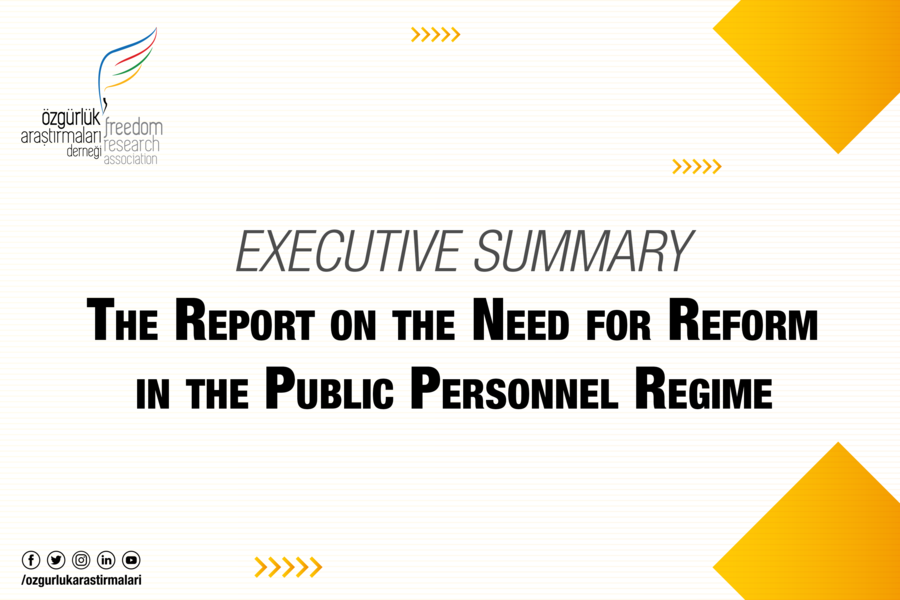 The Project of Structural Reforms in Turkey has been launched by Freedom Research Association with support of the National Endowment for Democracy and Friedrich Naumann Foundation Turkey Office to identify and concretize existing problems in the mechanisms of the legislation, Judiciary, Public Procurement Regime, Public Personnel Regime and Media Independence, which are the main institutions/structures in Turkey. Within the context of the project, alongside discussing existing issues in the relevant institutions, it has been focused on the steps that immediately need to be taken and proposed advisory solutions for structural reforms.

The report, titled “The need for reform in the Public Personnel Regime” and prepared by Prof. Muhittin Acar, evaluated the main problems and emerging risks within the framework of constitutional basis and legal principles. Several factors; the economic and fiscal dynamics, social fabric, demographic structure of labor force, the level organization-mobilization, the basic characteristics of the state, type of relations between the state-society and politics-bureaucracy, the visions of the governing staff on democracy, a vision of change on public institutions, services, and officials are very important to shape the structure and functioning of the public personnel regime. Public personnel regime is a crucial area of study not only in terms of being affected by different elements but also its roles on various issues like sub-systems of the public administration, it can profoundly create an impact on the administrative reform.

The fundamental constitutional-legal principles, which are legality, equality, competence, career, impartiality that are the ones form the public personnel regime in Turkey were discussed through the report. Legality roughly means "legal conformity", is a narrowed-scope concept than the concept of “juridicite”, which can be defined as "compliance with the universal principles of law". For this reason, the principle of legality has been evaluated based on the public personnel system’s formation and functions as well as regarding the conformity of decisions and operations to the regulatory compliance, and universal principles.

Considering the articles of 128 and 129 under the section of "provisions on public service officials" in the Turkish constitution have been examined in detail; it can be claimed that public services’ main form of employment is a civil servant position, and other forms can only be applied in the exceptional circumstances with temporary conditions according to the general administration’s principles. When it comes to practice in Turkey, contractual staff recruitment which should have been conducted in exceptional circumstances with temporary conditions, has been increased and become widespread in recent years. On the other hand, according to the Turkish constitution, the relevant changes and the fundamental issues of civil servant position and other public officials can be modified by the laws, which is also named “legislative regulations”. However, it can be stated that the methods and mechanisms that grounded on the implementation of regulations and modifications regarding public personnel regime for about half-century have not been accordingly executed. In addition to legislation, activities are being conducted with “the omnibus bills (bag bills)” and modifications with presidential decrees as well as collective agreements.  It can be asserted that the Turkish Grand National Assembly’s roles on determining the legal framework of the public personnel regime are limited which is far from the original version in the constitution.

Equality is a principle that should be highlighted in the structure, functions and, execution of the public personnel regime. Also, the "positive discrimination" in favor of "disadvantaged groups" should be centered and put into practice more within the scope of equality. Moreover, although the role and obligation of state apparatuses have been expanded in ensuring gender equality, related inclusive changes have not been integrated into the public personnel system. Both in public and private sectors, “a glass ceiling syndrome" still stands as a sad reality in the practice in Turkey. That’s why “inclusive bureaucracy” should be amplified based on the principle of equality.

Competence (merit) is one of the other important principles that shape the public personnel system and has a vital role in institutionalization, competence, and point of reference against clientelism, favoritism in the recruitment and promotion processes. The principle of competence should be integrated into all aspects of the public personnel management system, rather than to be executed only during entrance phases. If the competence and other aspects of meritocracy could not be applied in the public sector, mediocracy would otherwise be the form of management that is also called “the dominance of mediocre”.

Carrier is an important concept for civil servants who works in permanent and secured positions in the public services that have primary and continuous components. The most important aspect of the carrier principle is that the rules, functions, and regulations are clear and easily understandable for people who are within the system and those who want to join. It is also crucial for sustaining the institutional memory and practice of  competence and predictability in the state functions. Turkey's traditional public personnel system has been executed as a “closed career system” for years, but the legislative amendments, modifications, and developments in the implementation phase recently have changed the patterns.

Yet another one, impartiality, sometimes expressed neutrality, refers to the prevention of politicization-partisanship in the public administration within the context of the relationship between politics and bureaucracy and especially in the processes of electing/appointing/dismissing senior executives. There is a need of brainstorming on the institutional practices and developing new legal framework, and policies due to the possibility of changing the political environment and dynamics and reducing the risks of public officials becoming part of the political polarization and partisanship.

In the Turkish presidential system of government, where the president is also a chairman of the political party, it would not be possible to expect the officers, who are directly appointed by the president, to serve with objective political neutrality. Particularly, in recent months, because of high tension and arguments between the president’s senior executives and opposition parties’ members revealed that the necessity of change is standing. In the light of the evaluations and discussions regarding the public personnel regime in the report, some policy recommendations have been developed as follows: